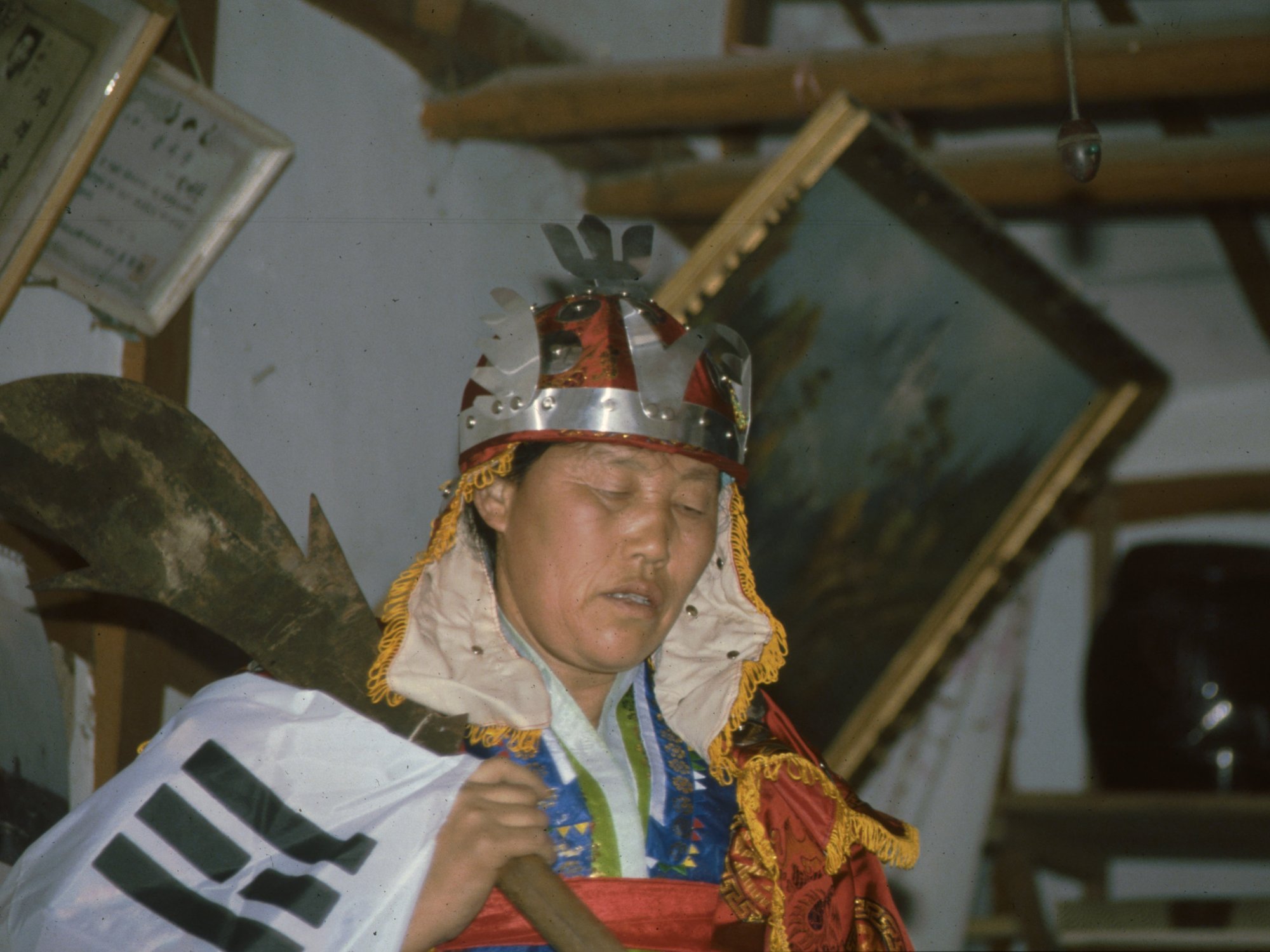 One of the highlights of our time in Korea was witnessing a “kut”, a shamanist ceremony. It was very difficult to arrange, because most Koreans at the time thought of it as primitive and did not want foreigners seeing something like that. In addition, many are fanatical Christians and consequently look down other religions (many spend hours in church every Sunday). They preferred showing the modern side of Korea and wanted foreigners to think of Korea as a modern country. I pestered my students long enough until one offered to take me to a kut taking place in her neighborhood.

The shamans, called mudang, are almost all women in Korea. Confucianism as a male-dominated system left no room for the spiritual needs of women, so they found such in shamanism. The shaman had just moved into a new house, and the ceremony was to drive out the evil spirits. It seemed like a friendly house-warming party until several women started beating drums and gongs, getting increasingly louder. 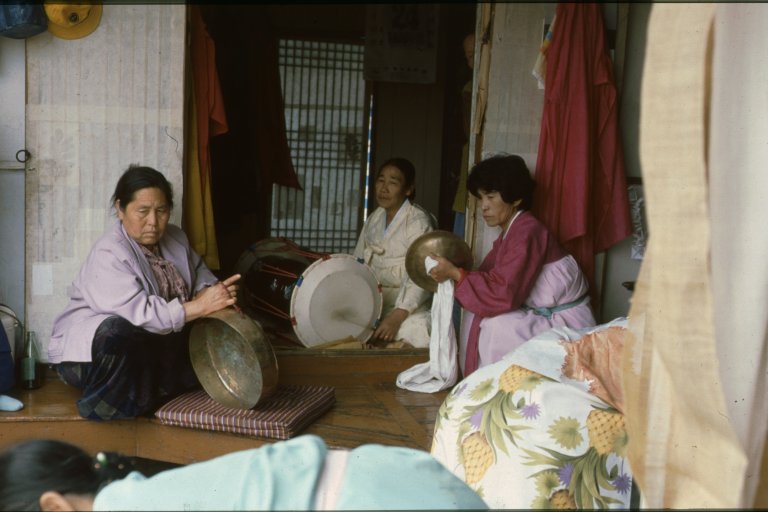 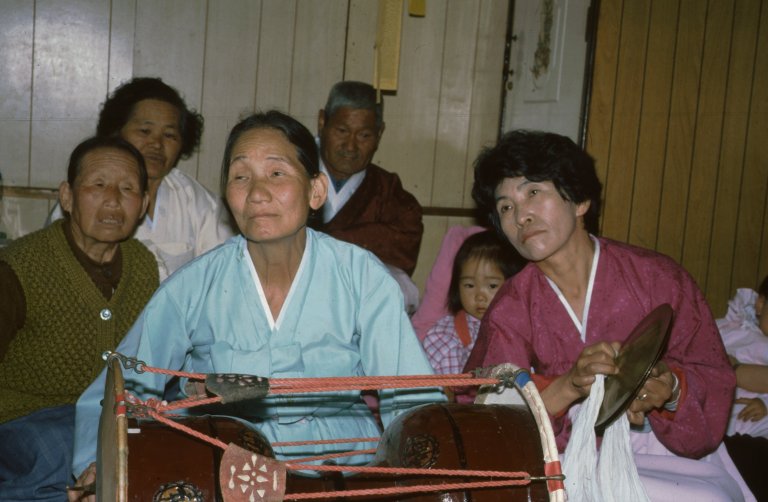 The mudang then put on different clothes, once those of an ancient general once of a scholar of hundreds of years ago, and starting twirling and dancing into a frenzy in the courtyard of the house (traditional Korean homes have a courtyard in the center surrounded by different rooms). She spoke in ancient Korean, something I later learned when I played a tape recording I had made to students, and the words were those of the long-dead characters from the otherworld who had returned and taken possession of her. 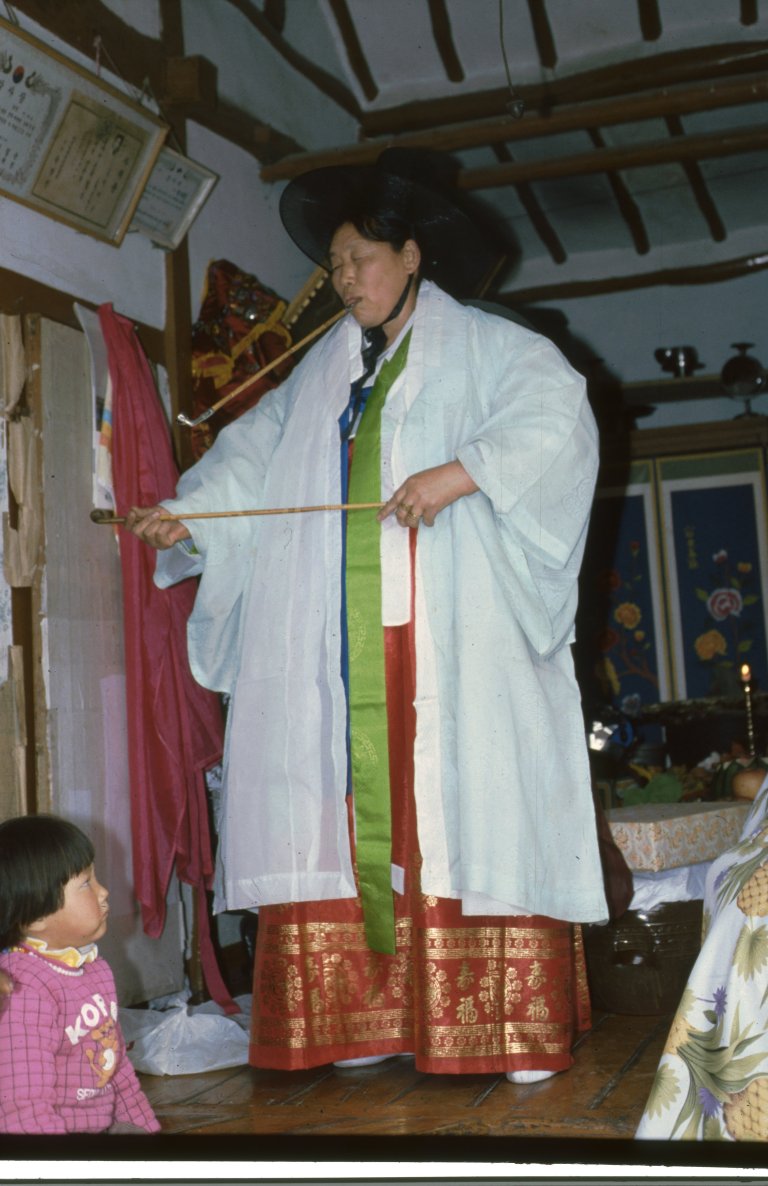 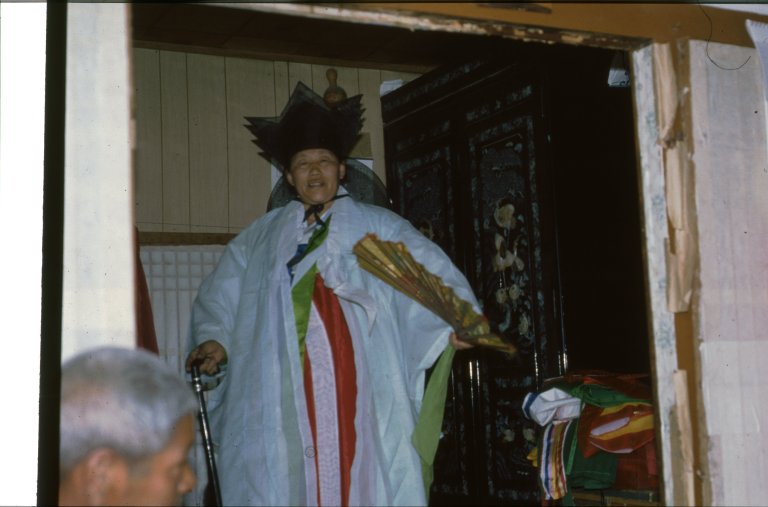 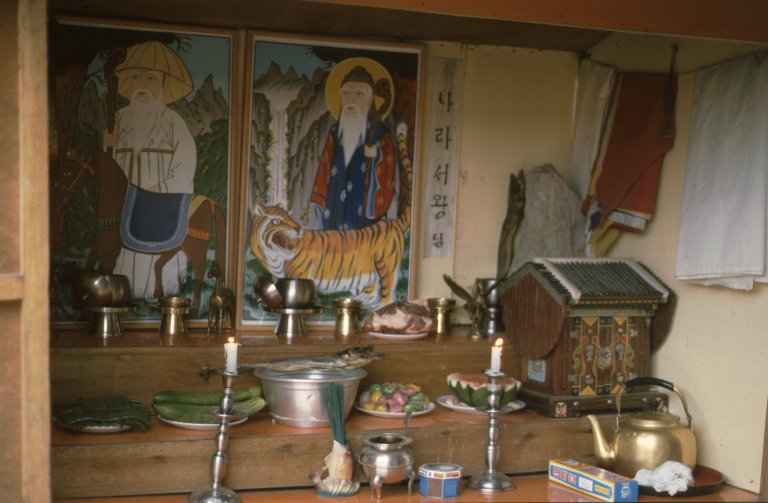 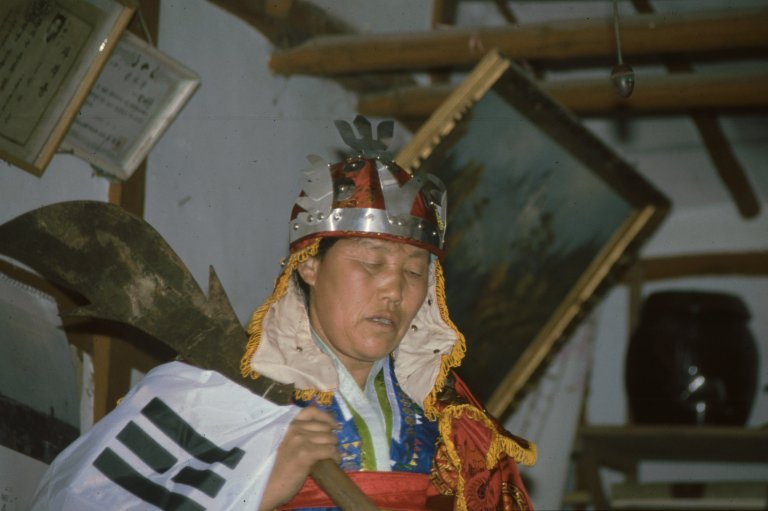 The house where the kut took place and some locals participating in it or just observing: 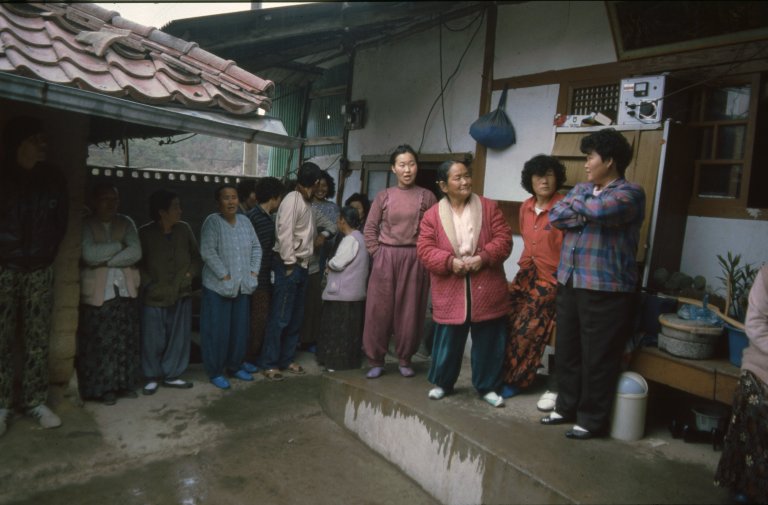 Eventually the music would become slower and stop, and everyone would act as if nothing had happened. Food was passed around, and people joked and talked. We danced, ate, drank and joked. 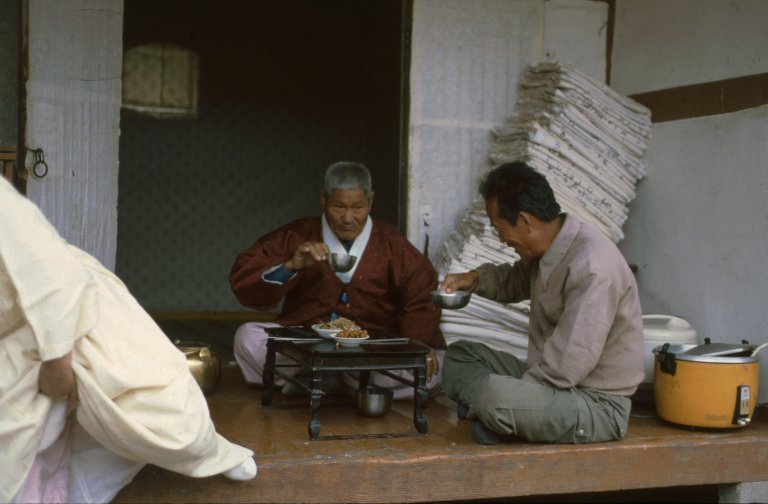 But then the drums started up again. One woman cried when the mudang gave her a message from her dead husband. Another woman also went into a trance and put on clothes from spirits of another era. 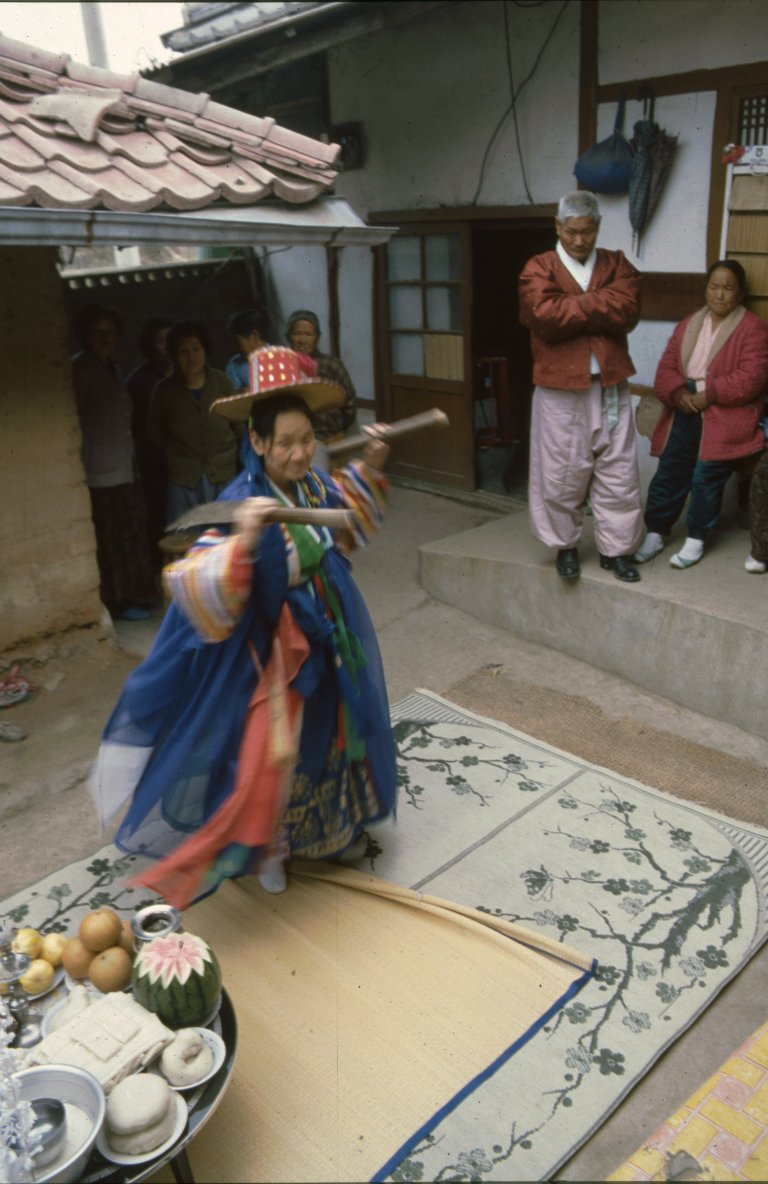 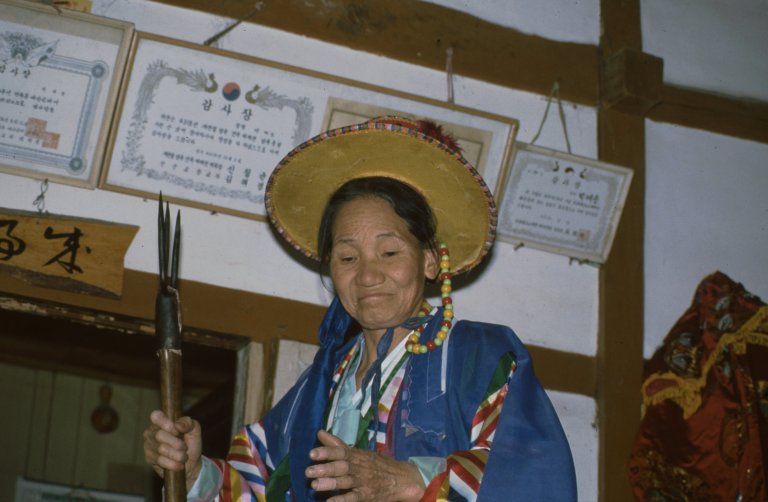 There was a whole dead pig, which they balanced on a pitchfork; it is stayed balanced, it was a good sign.

Two razor-sharp knives were placed on a large jar, which the mudang then stood on (I felt them, and they were really sharp!). She gave her most important messages from the otherworld while moving her feet on the knives, but there was no blood. 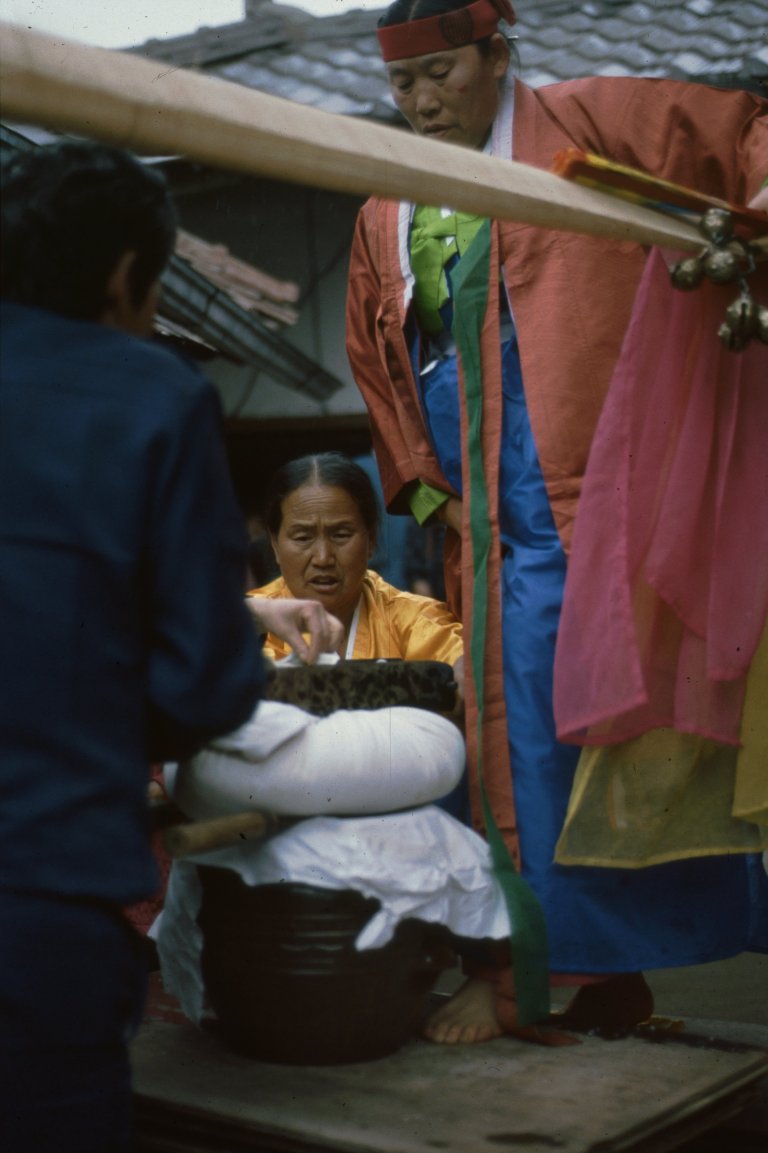 We visited her and a kut the next year, but she had become poorer and was in a much more dilapidated shack. This time, she had a ceremony for a teacher from Seoul, who was suffering from back pain. The teacher and the people accompanying him were a little confused about three foreigners witnessing the ceremony, but they had to accept it, since the mudang’s word was law. 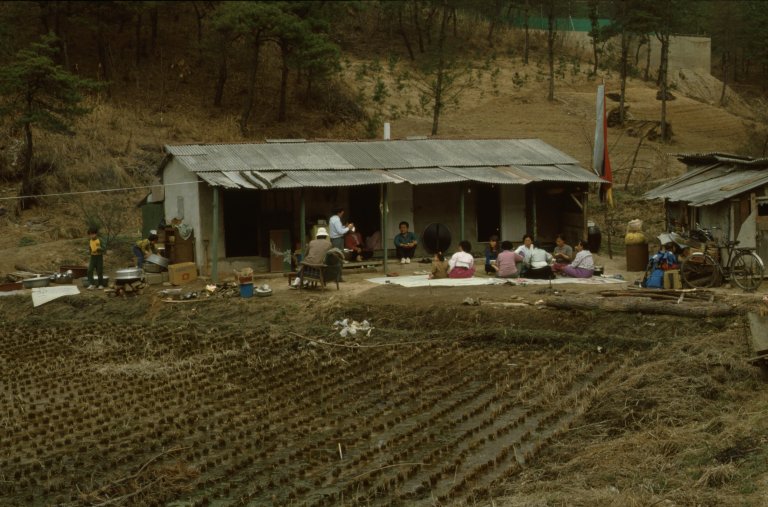 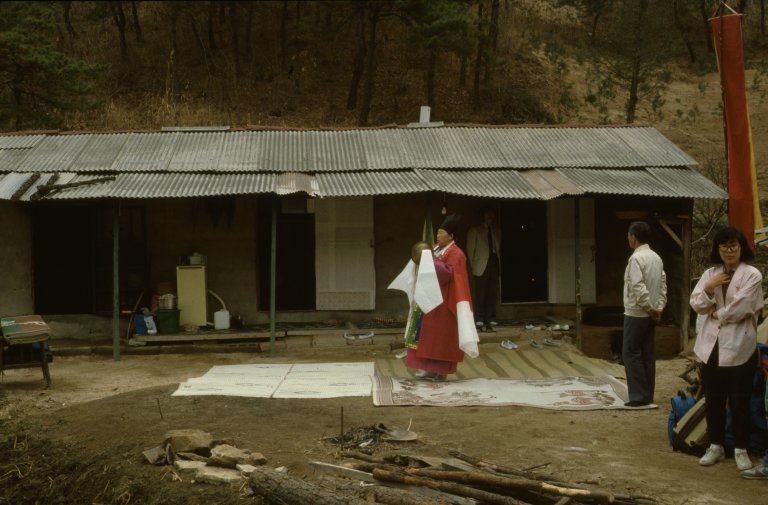 This time, there was only a pig’s head and not a whole pig, either due to the mudang’s worse economic situation or because the teacher had not been able to afford one. Again, the music would slowly stop, the mudang came out of her trance, and food would be serve and everyone acted as if nothing special were happening. 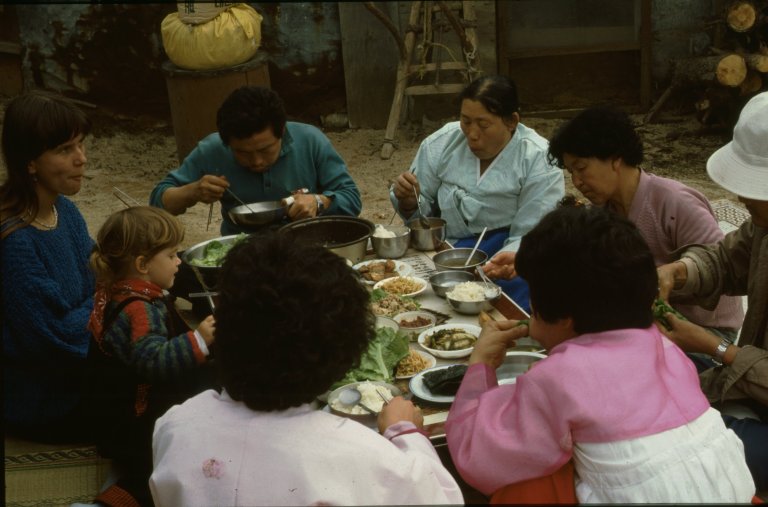 There was no real kitchen, and cooking was done outside. 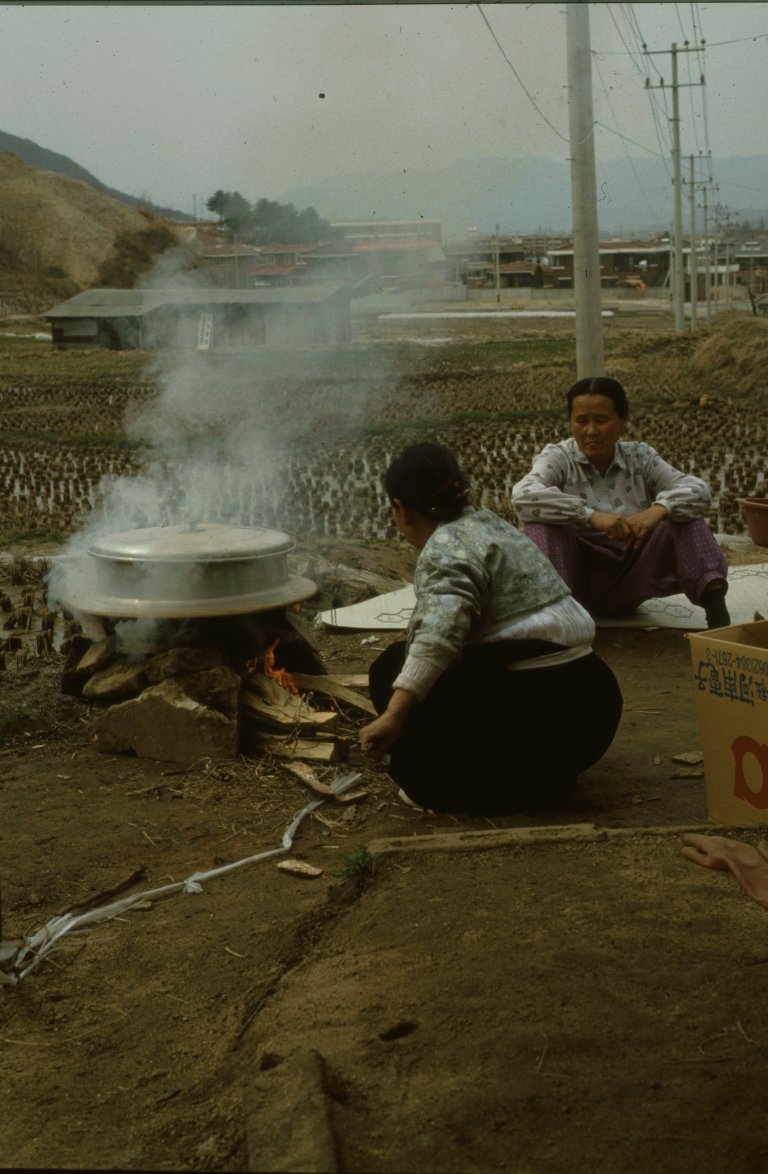 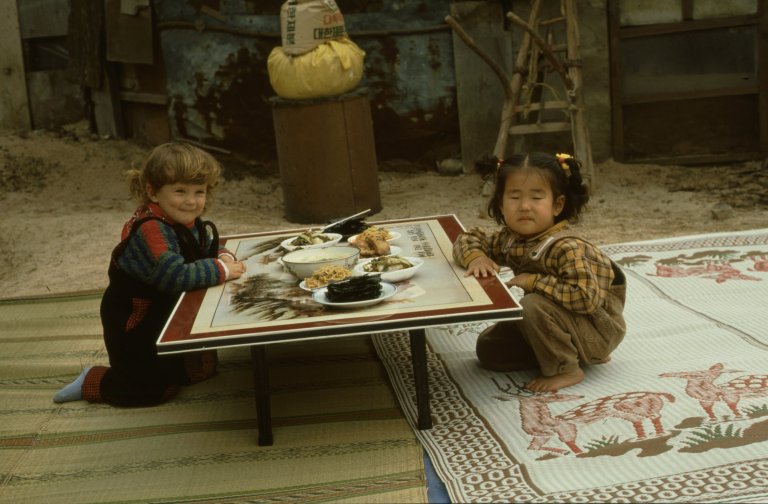 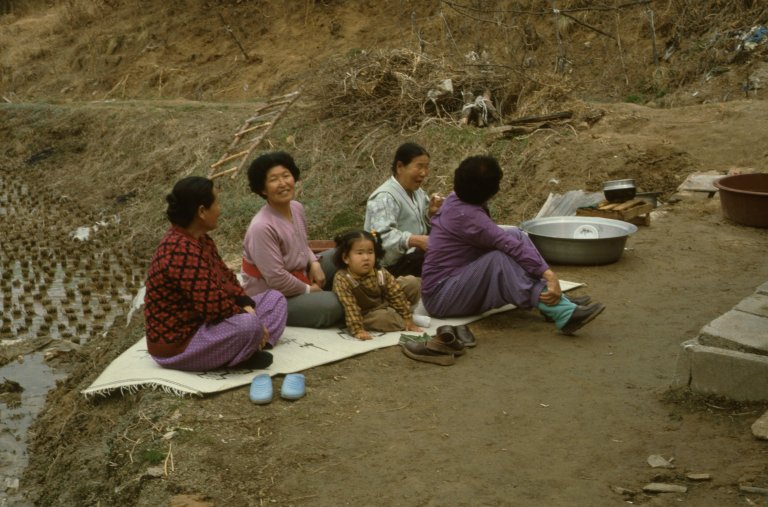 Again, some women would start playing gongs and beating drums and the mudang would go into a trance. At one point, she loudly admonished the teacher, and it was quite a sight to see this big woman towering over the cowering man, especially since Korea is such a macho country where women seldom had a say in things other than the upbringing of children. (At that time, when a woman married, she lost her job. If she divorced, it was almost impossible to get work other than as a prostitute or selling vegetables in a market. Much later, I read that foreign companies were happily hiring Korean women, since there were many highly qualified ones available who had difficulty finding work in Korean companies.)

The mudang had several flags rolled together, and participants were asked to picked one from the stick. Depending on the color of the flag, it was either a good or bad omen. We always picked a red flag, which was a good omen, and the mudang told me that I would be very successful later in life. Still waiting for that!

My daughter also picked a flag with a good omen.

Then it was time to stand on knives again and communicate with the otherworld.

This year, another woman also went into a trance and stood on the knives. 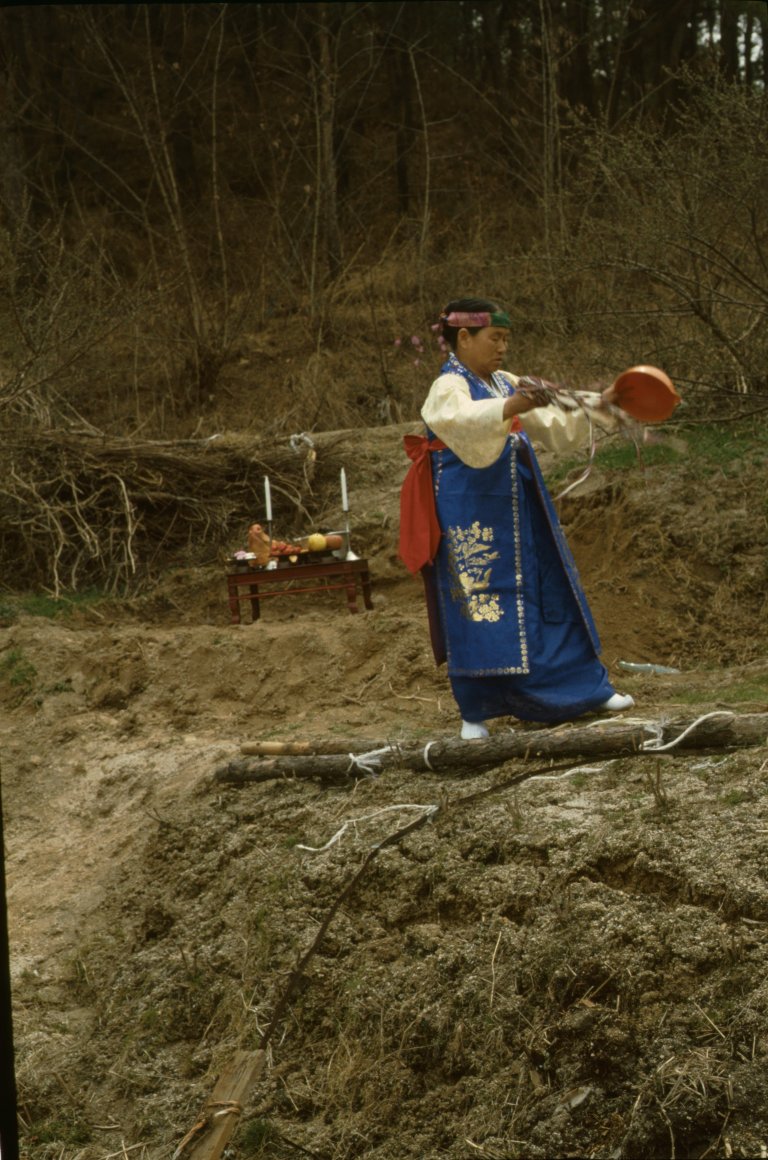 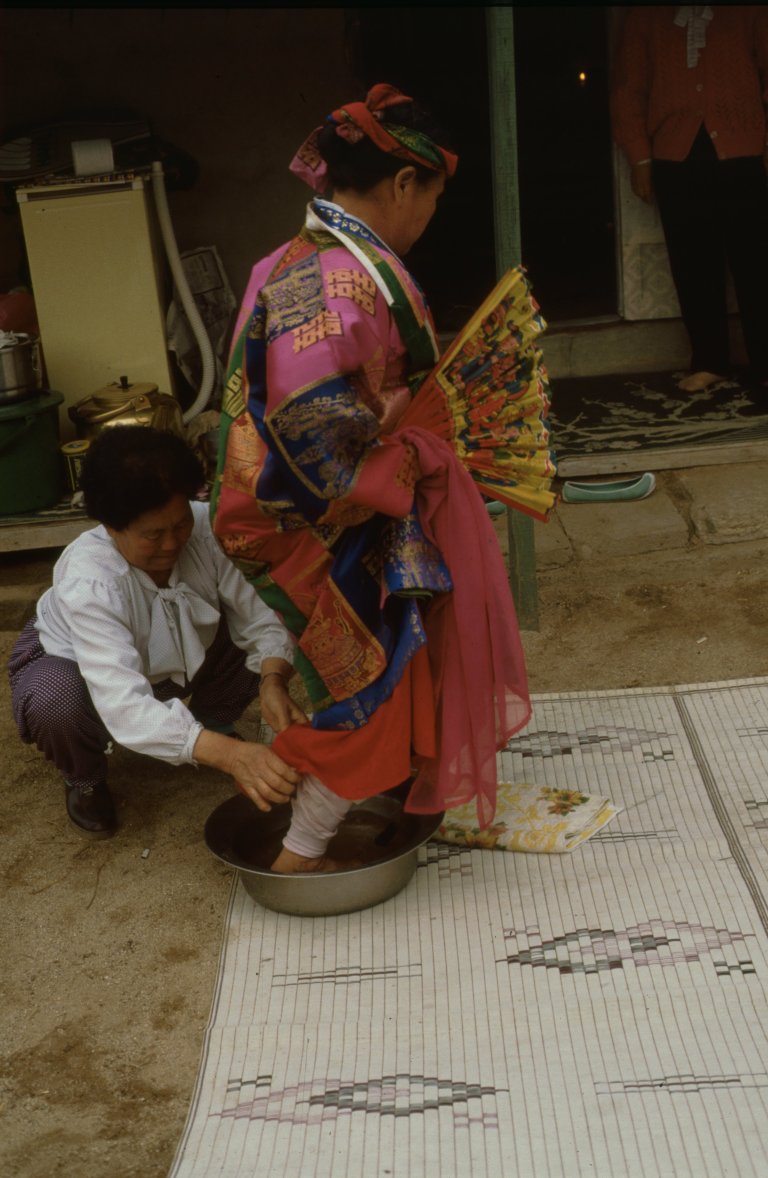 Quite amazing this time, the man also dressed in the mudang’s clothing at one point and stood on the knives. Again, there was no blood despite the razor-sharpness of the blades. 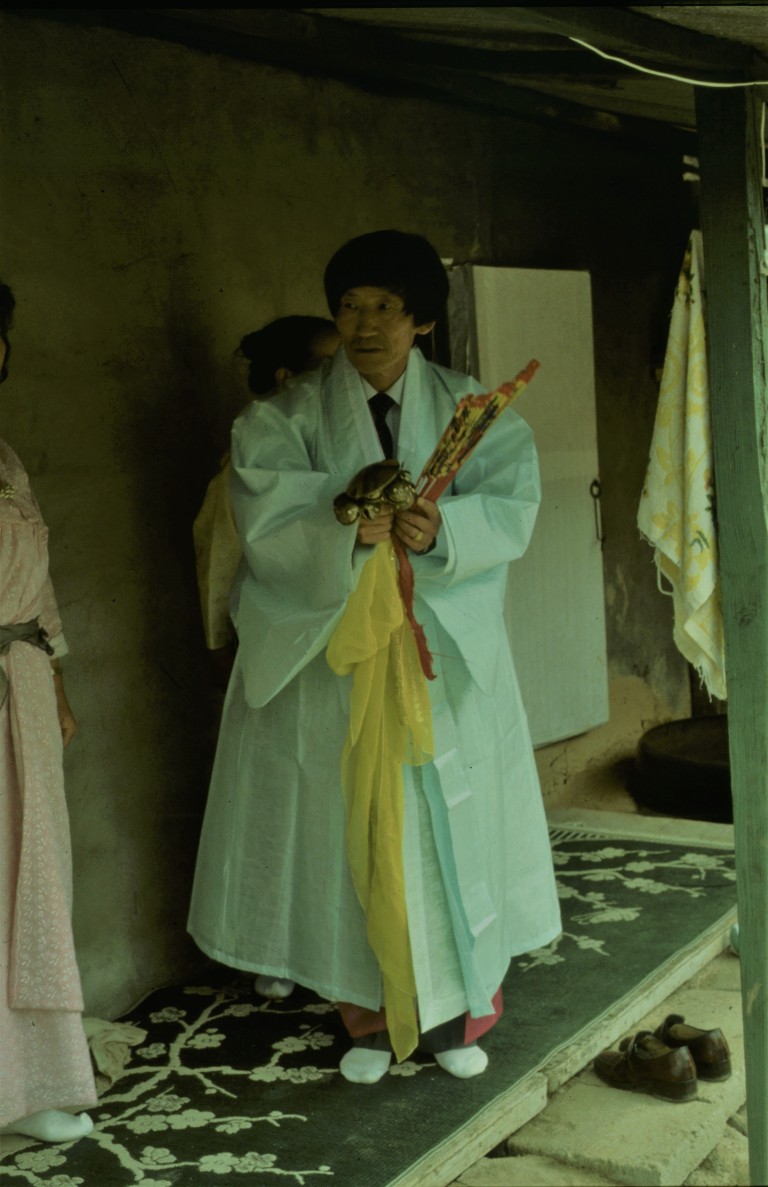 Do I believe that the shaman really communicated with the otherworld? Let’s say I wouldn’t rule it out. At any rate, I am very grateful for the hospitality and friendliness that the the shaman and these women gave to unknown strangers.

2 thoughts on “Mudang: A Shaman in Korea”