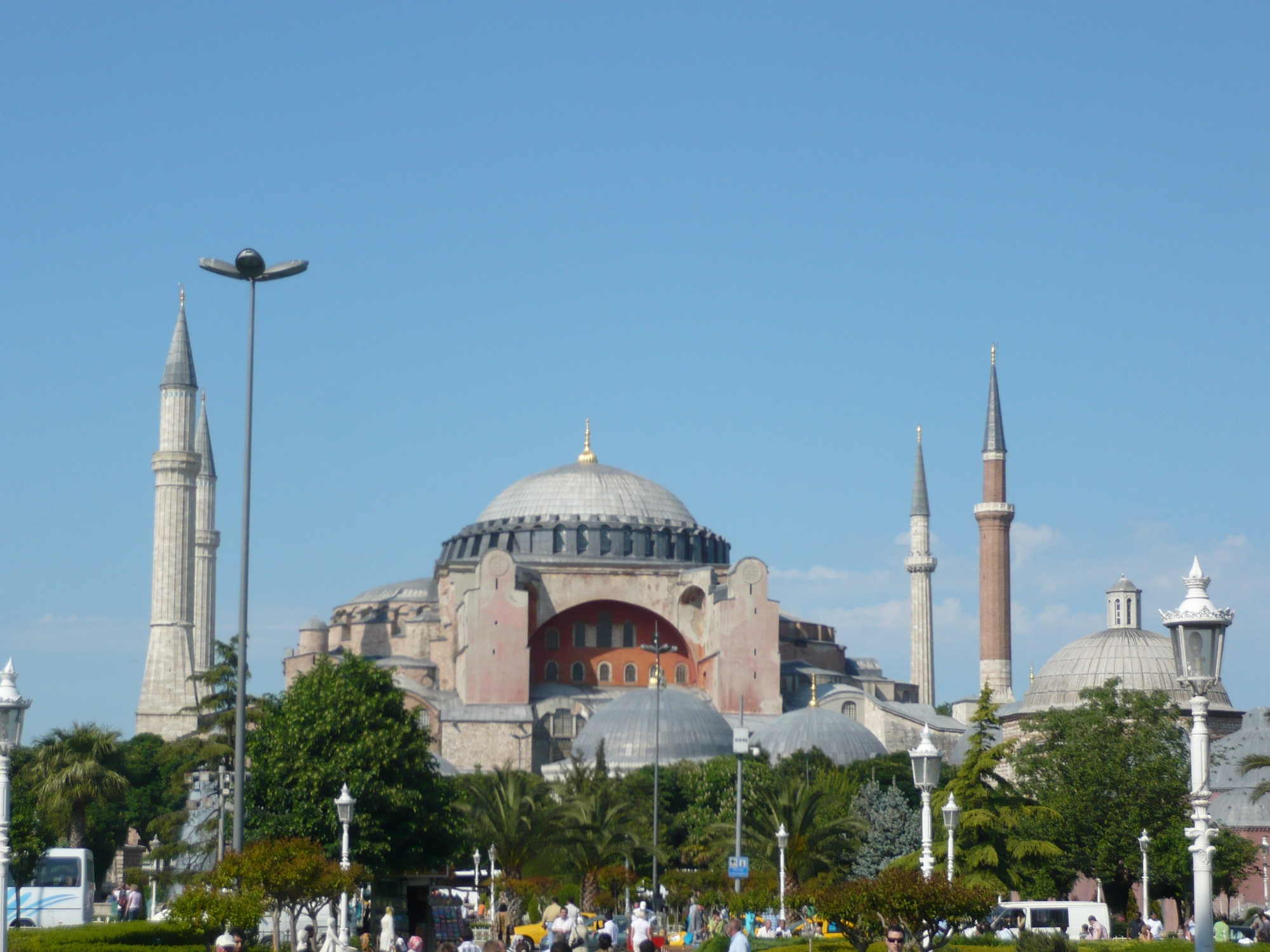 I had briefly passed through Istanbul in 1976 on my trip overland to India. At that time, my finances were restricted to say the least. I had no guide book and only traveled using tips from friends and fellow travelers on the road. Although the first Lonely Planet guide book had appeared two years earlier and was precisely about the itinerary I was taken (Across Asia on the Cheap), I was unaware of it. At that time, I stayed in a cheap hostel across from the Blue Mosque and didn’t see much of the city in addition to that, since there was an Afghan offering cheap transportation to Kabul ($15 for the two-week journey covering 4,500 km) in one of three buses bought in Germany, which he was transporting to Afghanistan, and departure was soon.

Our hotel had a view of the Blue Mosque, impressive as always. I was constructed sometime between 1603 and 1617, commissioned by Sultan Ahmed I, partly to reassert some sense of grandeur after defeat in war with Persia.

Hagia Sophia was originally constructed as a church in the 6th century by Justinian, a Roman emperor when the center of Roman Empire was Constantinople (as Istanbul was then called). Mehmet the Conqueror converted it to a mosque in 1453, and Atatürk changed it into a museum in 1935, which it still was when we were there.

Construction was started by Mehmet the Conqueror in 1453.

The harem was unfortunately no longer operational.

But at least I was not conscripted to join these fellows.

Then we took a boat to Çanakkale at the western end of the Sea of Marmara at the Dardanelles, also called Strait of Gallipoli, where British and Australian troops were thoroughly thrashed by Atatürk (the father of modern Turkey; I was surprised to learn he was born in Macedonia, which then belonged to the Ottoman Empire) during WW I, a great embarrassment to Churchill who had ordered the attack.

The town was a nice change from the hectic of Istanbul.

We then took a bus to Ayvalik farther down the coast. You can see the Greek island of Lesbos from there, and later the town became saturated with refugees attempting and sometimes succeeding to cross the waters and enter the European Union. It became a symbol of much hardship, especially since many drowned in the attempt.

However, it was still a quiet seaside town when we were there. There were many abandoned homes in ruins. Around 1920, the substantial Greek population in Ayvalik was deported to Crete, and the Turkish populace in Crete was deported to Ayvalik. Although this perhaps prevented riots between the peoples later, it still created great hardships.

We had great accommodation in an old renovated home with a wonderful terrace.

And a great view

The décor inside was exquisite.

A nice beach nearby, but which is very crowded in the tourist season

And a tall tale

I bought this amulet at a market from a Roma girl. She wanted two euros, but since it was chipped, she sold it to me for one euro. Later, when people asked me about it (and guessed that it had cost between 10 and 20 euros), I told them that I had been given it by a woman on a small island. When I met her, she believed that her husband, a fisherman, had drowned in a shipwreck. We had a romantic relationship for several months until one day the woman heard that her husband had not drowned after all and would arrive home very soon. I had to leave the island helter-skelter, but before I left, she gave me this amulet. Because it had a defect, she said it represented our unfulfilled life together.

To my great surprise, many people whom I told this to believed it to be true or at least asked if it were.

A day trip to Ephesus was a must, a very well conserved ancient Greek city.

The Beyoğlu district on the European side of the city. It is full of great restaurants and seemed to be a place where the younger set congregated. I have rarely seen so many good-looking women and men as there (perhaps only in Brazil years ago)! I had to think of when the travel writer Paul Theroux interviewed the Turkish writer Elif Shafak, he said she was so beautiful that he could not concentrate on the interview.

Galata Bridge connecting Asia and Europe is a favorite place to fish.

And to rest while waiting for a bite

As usual, the trip was too short and it was time to head home.