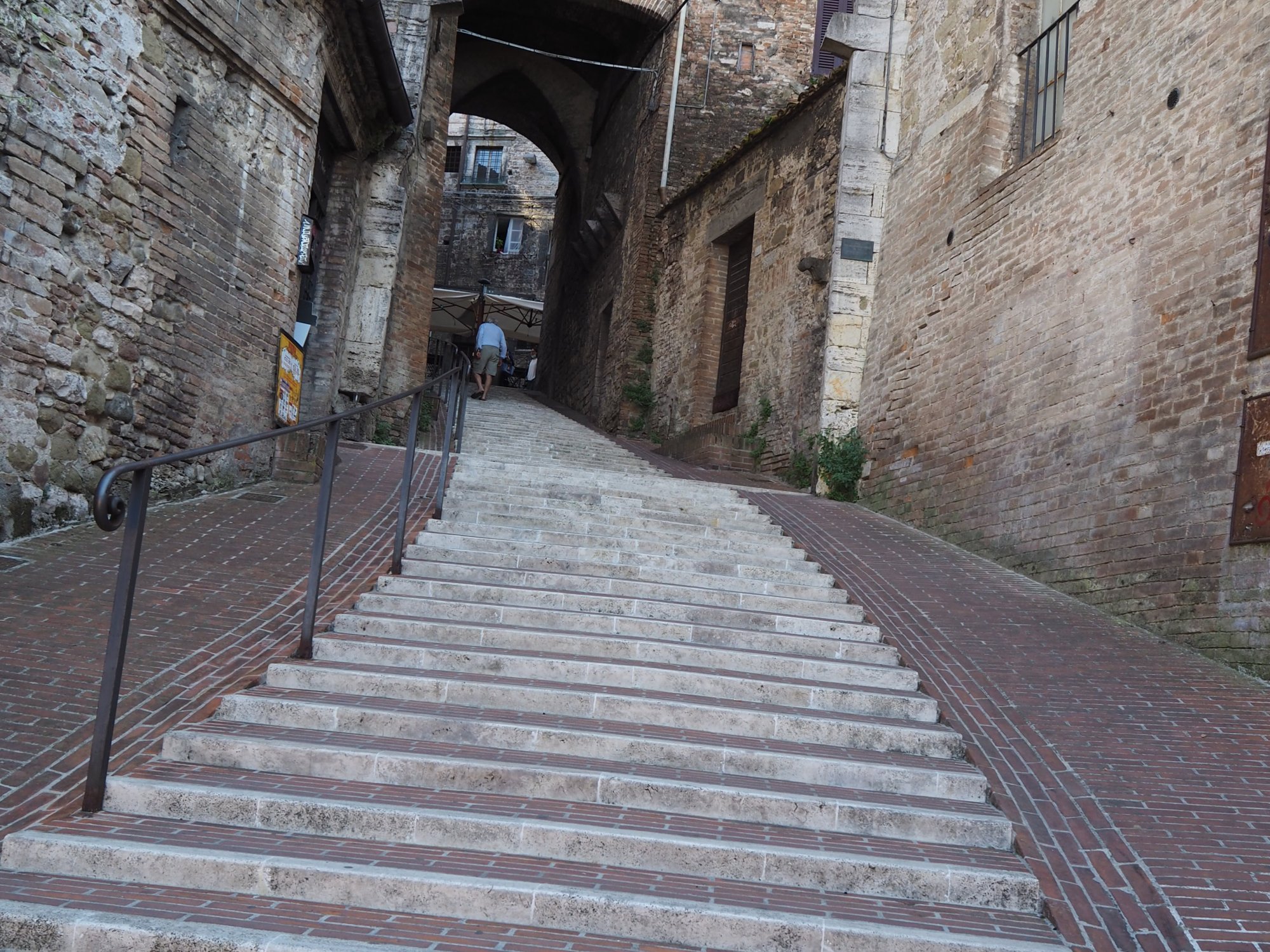 I had wanted to take an Italian language course in Perugia for many years, but somehow never managed it. A friend and the wife of a friend attended the school, at which I wanted to study, and they raved about how good it is. I first decided that I needed to improve my Spanish somewhat for fear of confusing the two. I spent a couple of years taking Spanish classes where I live and in Spain until I felt I was ready to cope with Italian. However, just when I planned to study in Italy, the Covid-19 pandemic emerged and it was not possible for another one and a half years.

Consequently, I took some more Spanish classes and beginning Italian at the evening school in Freiburg, which provided a good introduction but the pace was way too slow. Many people take these courses in the evening just to socialize, and I was told that some come and want to register for French one evening, but when told the class is full, then they say okay, Spanish. Many others work all day and are a bit tired in the evening or give up quickly when they realize that they have to do homework and study during the week.

I finally made it end of this summer, and my expectations for the school were completely fulfilled. Italy required a “Green Pass” proving vaccination against Covid-19 for trains, restaurants and school as well as even some churches, which allayed my worries about getting the disease during the trip. The administration answered all my inquiries promptly and arranged for a nice apartment in a great area of the city. The teachers were all quite professional and concentrated on the areas where they recognized that I needed instruction and practice. As a result, I made a lot of progress in the two weeks that I studied there.

I had signed up for intensive lessons, which are normally composed of six hours of class per day. However, there were very few students when I was there due to the Covid-19 pandemic, and I only had three hours of classes per day with one other person the first week and alone the second week. This was probably just as intensive as six hours with four or five other students, but it left me with a lot of time on my own. I normally do not enjoy sightseeing much, since I have seen enough temples, churches, mosques, etc. to last me a lifetime. I suppose such is interesting for certain people, but I enjoy contact with locals and soaking up the general atmosphere of a place more than visiting every place of interest. However, I would up playing the tourist for lack of alternatives.

An Italian friend where I live had studied in Perugia and recommended a restaurant, Dal mi Cocco, which happened to be around the corner from the apartment where I was staying.

The menu was written in dialect, so I needed to have one of my teachers translate it for me.

There is a set menu, changing every evening, with everything fresh and made on the day. I had big portions of gnocci and tagliettele as first course followed by a meat dish and cake for dessert. A bottle of good wine cost only €5 (not available per glass), which I was not able to finish. The pasta was delicious, but too much food to go there often.

There were many small places offering slices of pizza, a great lunch. I also discovered “torta de testo”, a flat, unleavened bread stuffed with a variety of fillings of your choice. Too bad it is not available where I live!

I had often wondered how Italian could eat a big plate of pasta as first course and then a second course of meat of fish. However, I discovered in Perugia that the first course was usually a very small portion of pasta. I also had thought that there must be many overweight people in Italy due to the food, but almost everyone I saw there was quite slender. Perhaps this is also due to its being situated on a hill with the necessity of ascending to the city center. But there are also some escalators that take you up there. In addition, there is a MiniMetro that goes every couple of minutes and takes you up to the city center, e.g., from the train station.

Perugia is famous for its long, ascending stairways, usually going under an arch at some point.

With the Cathedral of San Lorenzo behind it. The weather forecast has been great the week before I went, but then there was a lot of rain the first week and it was rather cold: quite unusual for the time of year!

The Sala dei Notari across from it, normally used for concerts. There are copies of the griffin of Perugia and the Guelp lion over the entrance, symbols of the city.

Inside, one of the few buildings where it was possible to enter. Many were closed for renovation, perhaps taking advantage of the fewer tourist in Covid times, or were closed due to Covid.

The Sciri Tower in the background, a defense tower built in 12-13 centuries, with the Church of Santi Stefano e Valentino in the foreground

A couple of the great views from the city:

The main drag, Corso Vannucci, with its many restaurants

I splurged one time and ate at a beautiful restaurant called Luce. The food was delicious although the portions somewhat small as is often the case in expensive gourmet restaurants.

The city is full of arches, many of which are former city gates (and I hope I remember which is which).

Arco Estrusco, which I passed several times a day from my apartment to the school and city center and back.

Arco dei Gigli, one of the five major gates in the Etruscan walls

The one I passed through on my way to school every morning, adjacent to the apartment where I stayed.

Small selection of the many churches

Former Monastery of San Franscisco dell Donne: it was the first Franciscan settlement in Perugia (1212)

Temple of Sant’Angelo: this is the oldest church in Perugia and was built in the 5th-6th century.

Convent of San Francisco al Monte: the library, which is supposed to be magnificent, was unfortunately closed.

Church and Bell Tower of San Pietro: the church has numerous artworks by famous Italian artists, and I was told that I would need one hour to see and appreciate everything.

Rocca Polina, a fort built in the 16th century, then destroyed and rebuilt. There are escalators that take you up to street level in the city center.

With so much time on my hands, I also took a couple of side trips around Perugia. The first one was a school outing to Spello, an ancient town that became a Roman colony in the 1st century.

It holds a flower arrangement contest each year and is known for the many flowers adorning almost every building.

We had a pleasant walk through town with a stop to savor some Italian ice cream.

On the weekend, I took a train to Lake Trasimeno hoping to go swimming. It was quite a nice place, though full of tourists and the lake is too dirty to swim in.

A ferry took me to Isla Maggiore

It was unfortunately not possible to visit this castle on the island.

A hike around the island did not take long, but was a nice change from the city.

My third side trip was to Assisi, which I suppose is a must when you are in the area.

And the view from there

I got a bit lost on the way down, but knew that I just had to continue downward to get to the bus stop to transfer to a train. It is a pretty town, but just has one souvenir shop after another interspersed with restaurants and sundry tourists. Can’t say I enjoyed being there.

We came across an amusing wall in Perugia where (I suspect) art students had used their imagination.

Outing with the school to a “snail-eating festival.” Entrance was quite strict requiring a “Green Pass” and having your temperature measured. The food was not great, but it was fun.

The helpful and friendly school director on the left with her husband and three other students.

My language certificate at the end of the course confirmed my progress; starting from level A2, I reached B1!