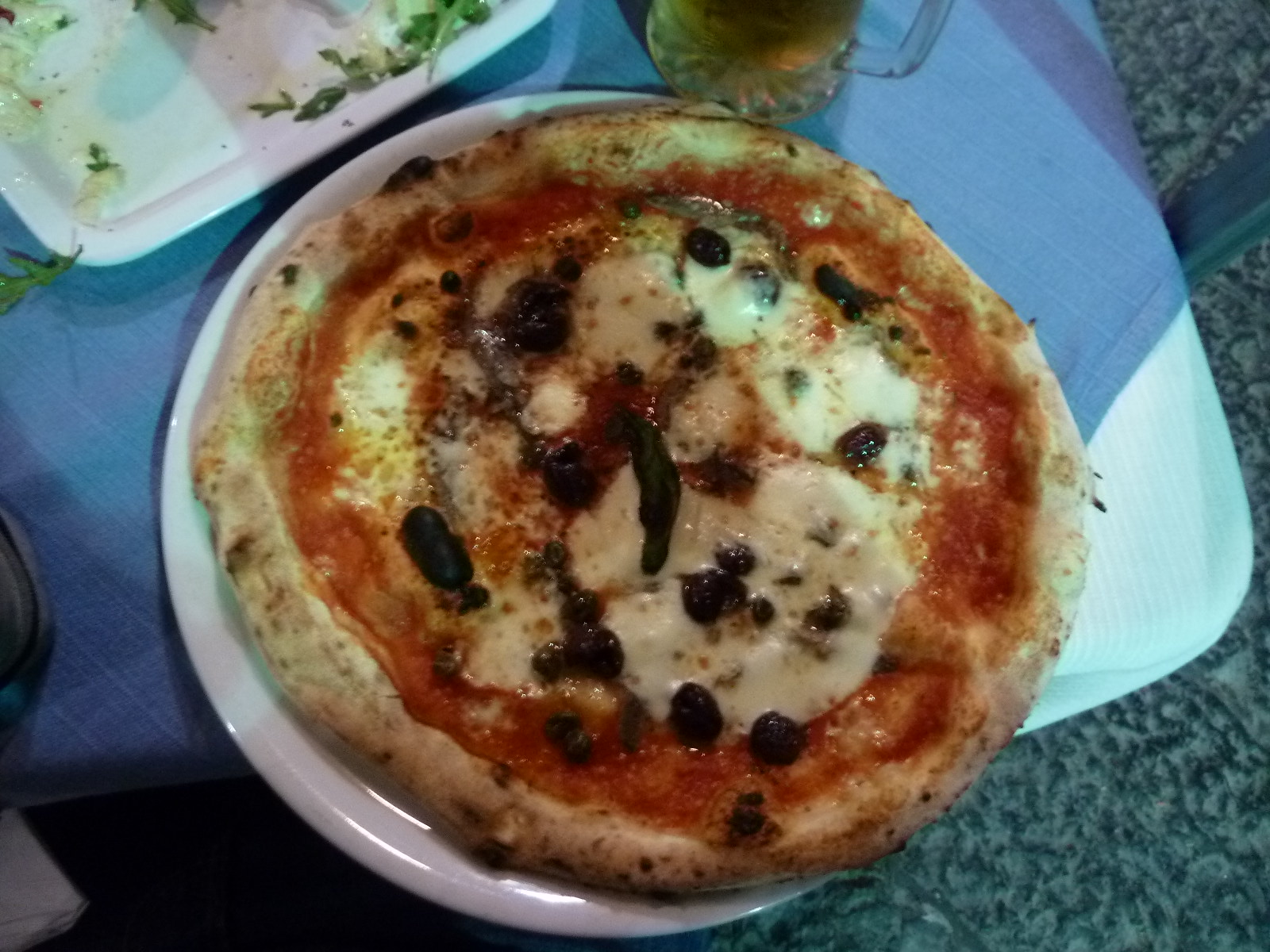 One of the advantages of living in the center of Western Europe is that many fascinating countries and cities are easily accessible. Years ago, my dream destinations were far away, exotic foreign cultures in my eyes that provided a great change of pace from daily life in the West. I would spend months getting ready for such trips, but was always happy to get back to non-hectic, safe and secure life in Europe. Of course, another reason for traveling to such distant destinations, i.e., almost all of Asia and South America as well as sundry countries in Africa, was that it was simply cheaper than traveling in Europe. We once calculated that if we drove to Italy for three weeks, stayed at campgrounds and cooked our own food, we would need the same amount of money as flying to Thailand, staying in bungalows and eating delicious food in restaurants three times a day.

That is no longer the case, and so many places that I loved have now been ruined (in my view) by excessive tourism that it is only a disappointment returning there. And then, I have realized that Europe has so many beautiful cities, towns and villages, and they are a short train ride or airline flight away. Of course, they are not as inexpensive as during my first trip through Europe many years ago, but then I don’t travel as cheaply as either: sleeping in a half-finished building in Munich and woken by the construction workers who came in the morning or on beaches in Greece when a meal cost one dollar and souvalki ten cents. But I still use a backpack, because sometimes there are steps, beaches or mountains and I have considerable prejudice against anyone traveling with a suitcase on rollers. The day I stop traveling with a backpack is the day I will stop traveling.

Naples, or Napoli in Italian, the pronunciation I prefer since it is such a melodious language (one of the reasons I started learning it a few months ago). We had a room in the Spanish Quarter with a great view of Mt. Vesuvius from the balcony. 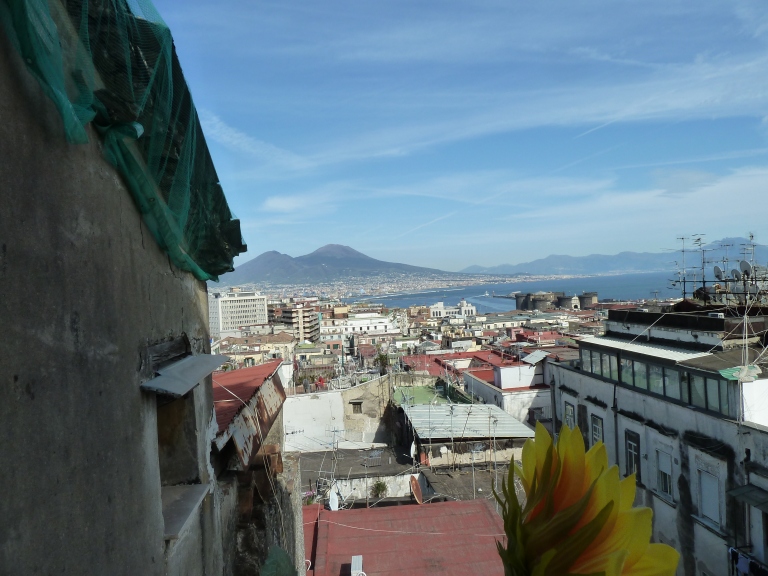 The district was originally built for a Spanish garrison in the middle of the 16th century. After they left, the buildings were occupied by poor locals and got the reputation of being a dangerous area with lots of thieves, although we found it to be quite safe. The alleyways are very narrow and quite steep in the direction away from the city center. 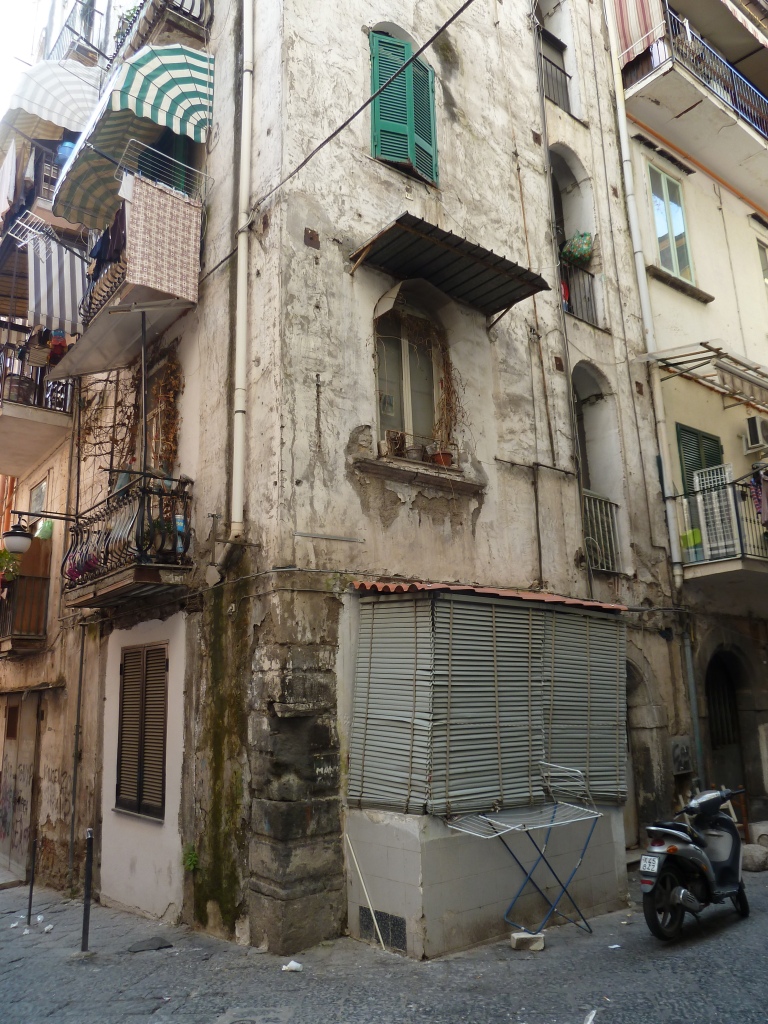 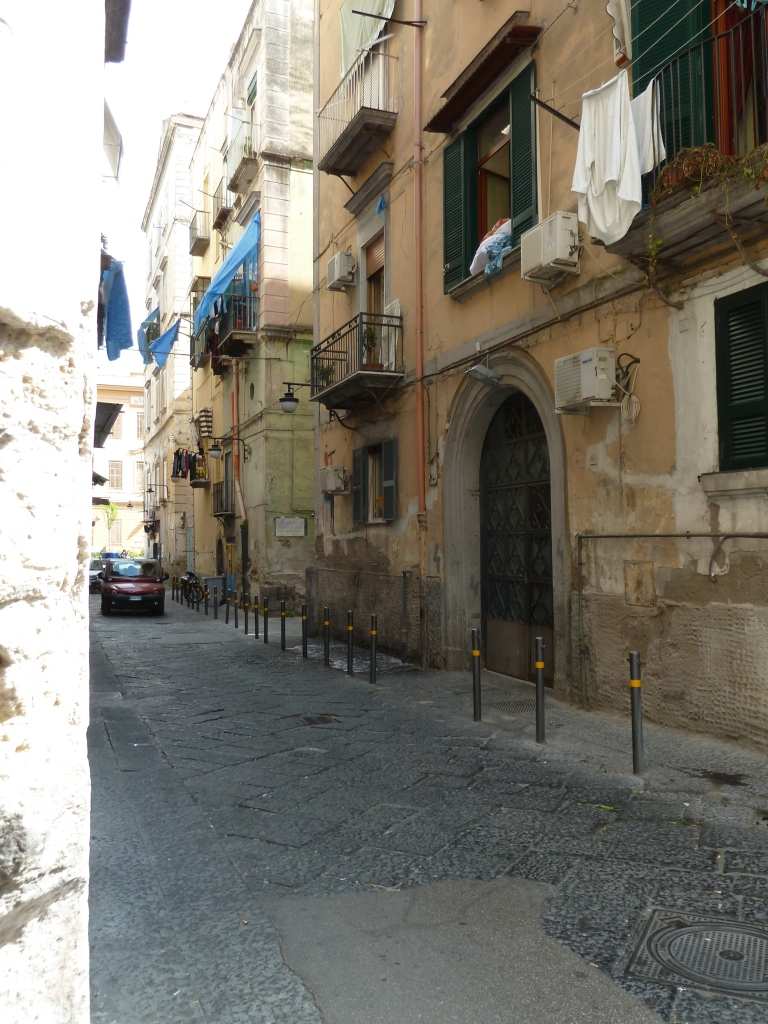 We walked down to Via Toledo, a lively shopping street where the descent from the Spanish Quarter ended. There seemed to be music everywhere, and this band was playing and singing Italian operas in Via Toledo. 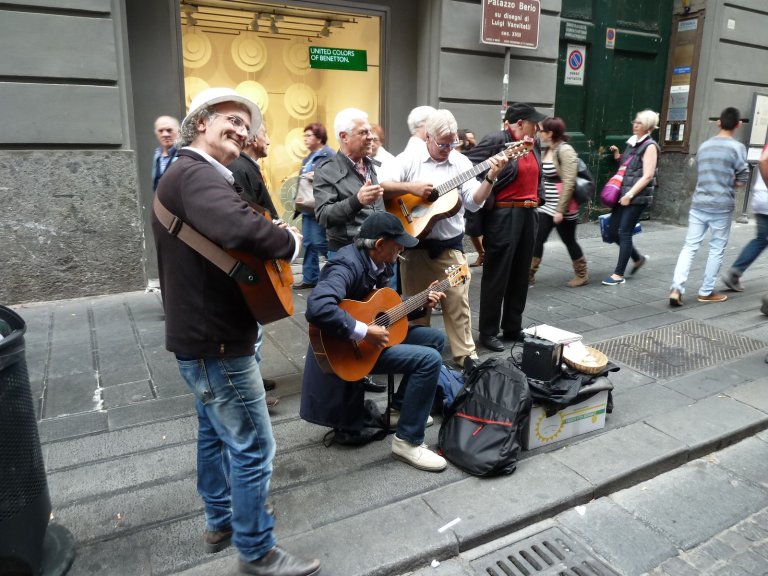 The end of the street opens up into the Piazza del Plebescito, named after the plebiscite in 1860 when the Italian south and Sicily joined the Italian republic. 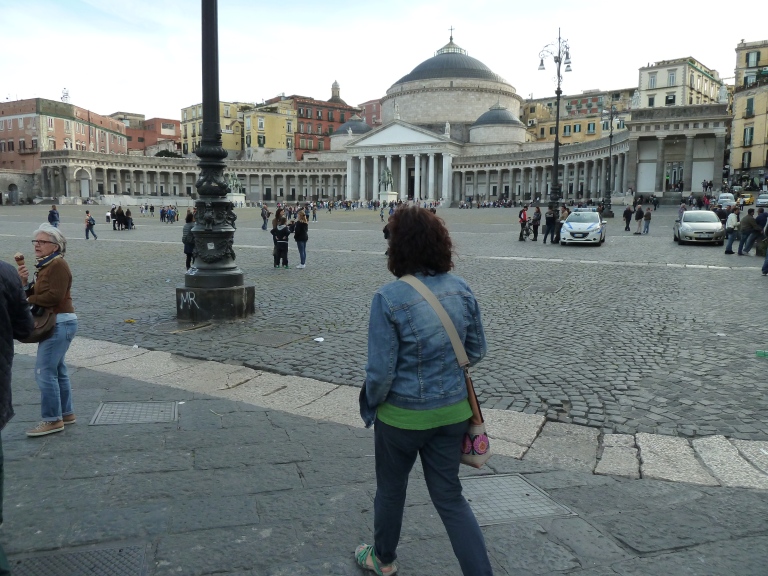 There were numerous photos on persons assassinated by the mafia

When we got there, a brass band of approx. 20 musicians was playing very funky music. 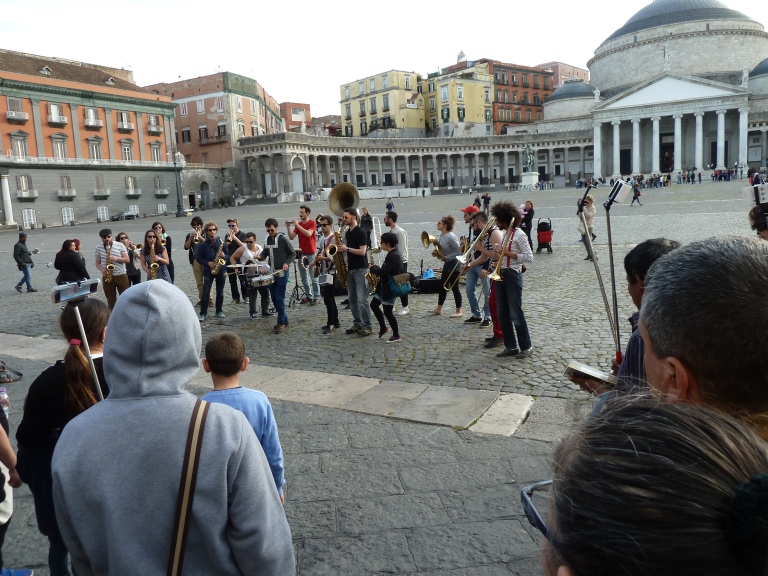 Later that evening, we saw them again in the Spanish Quarter, walking through the alleyways and playing their music. Grandmothers holding small babies were on their balconies cheering them on, and everyone in the quarter. I can imagine that people where I live would not be so happy if a loud brass band trudged through their streets late in the evening; they would probably call the police complaining about disturbance of the peace.

We were eating in the outdoor canopy-covered section of a restaurant the first evening, and approx. 15 Italians came in and sat at the next table. A street musician playing guitar poorly came in and started playing at their table. Immediately, all 15 started singing arias, and we were sure that they must have been professional singers from the opera! For three or four songs, we were treated to a fantastic, spontaneous concert.

Galleria Umberto I., a shopping center constructed between 1887-1891. Not really good for shopping, but quite an amazing site. It was built as a part of a movement to renovate Naples 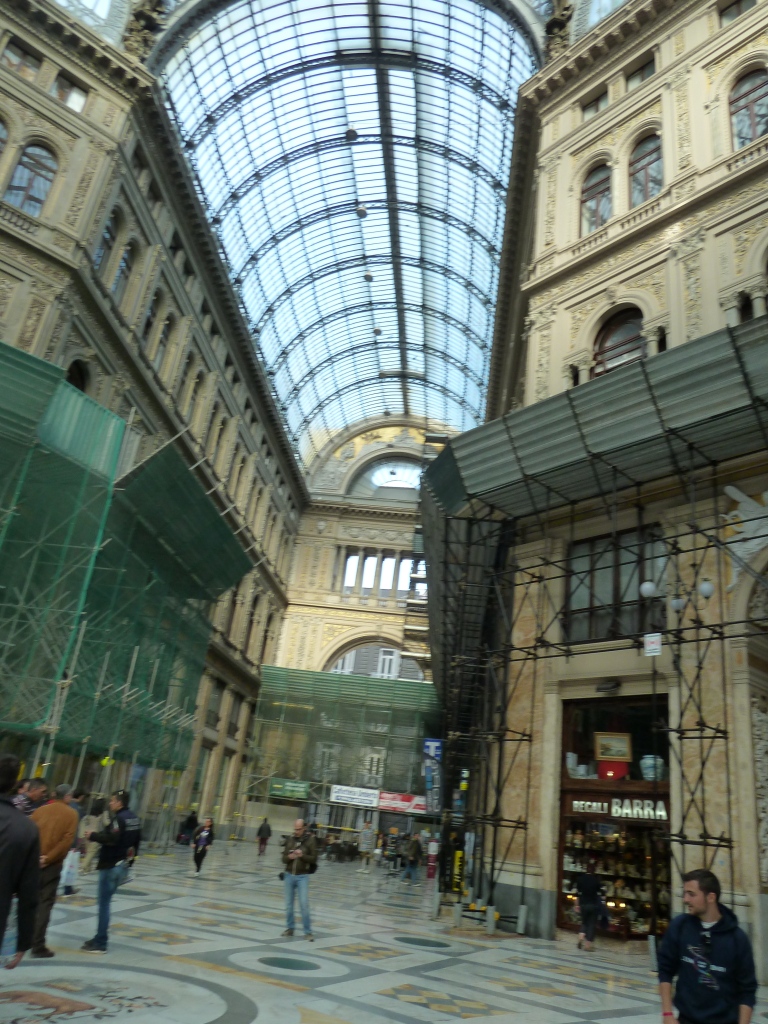 Naples Cathedral, the main church in the city, the construction of which was completed in the first half of the 14th century. 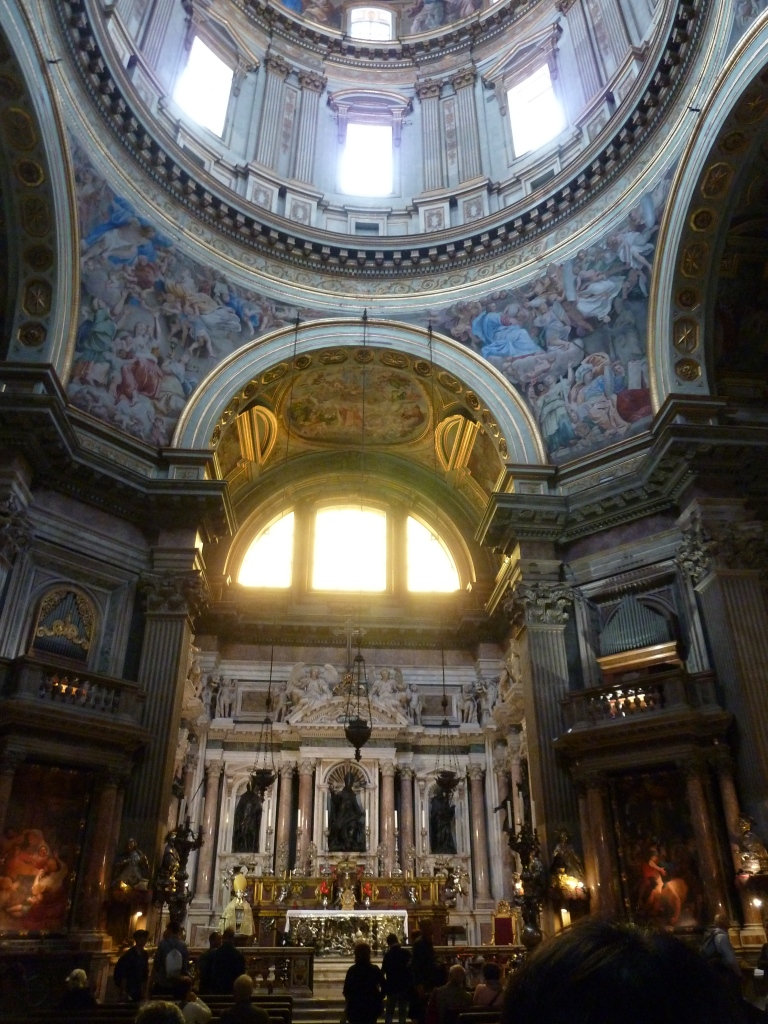 Naples is a city of art, and we chanced upon a group of art students demonstrating their sculpturing skills in the street. 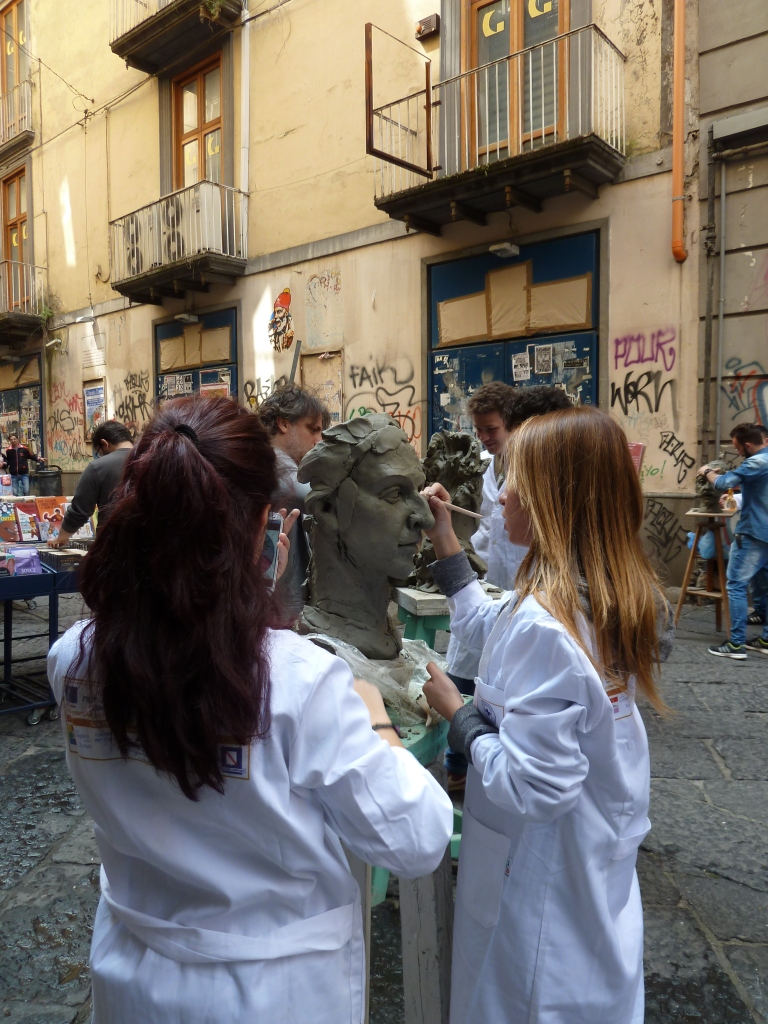 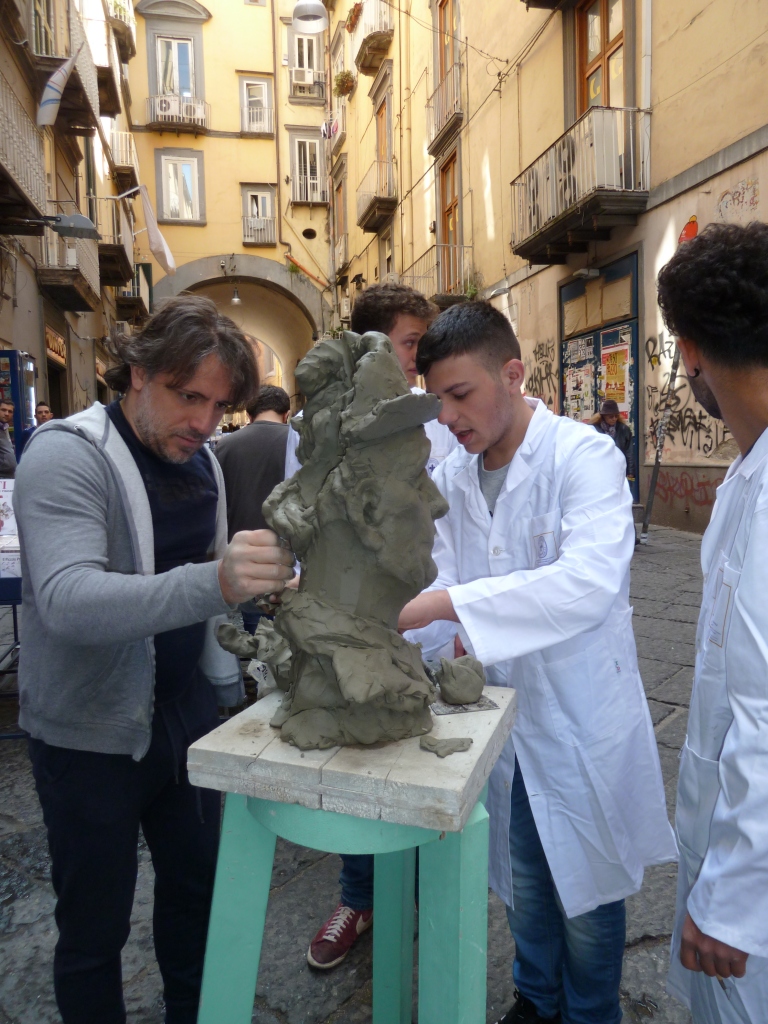 But there is also a traditional art in Naples in the Via San Gregorio Armeno where handcrafted nativity scenes are offered, many with a modern touch. 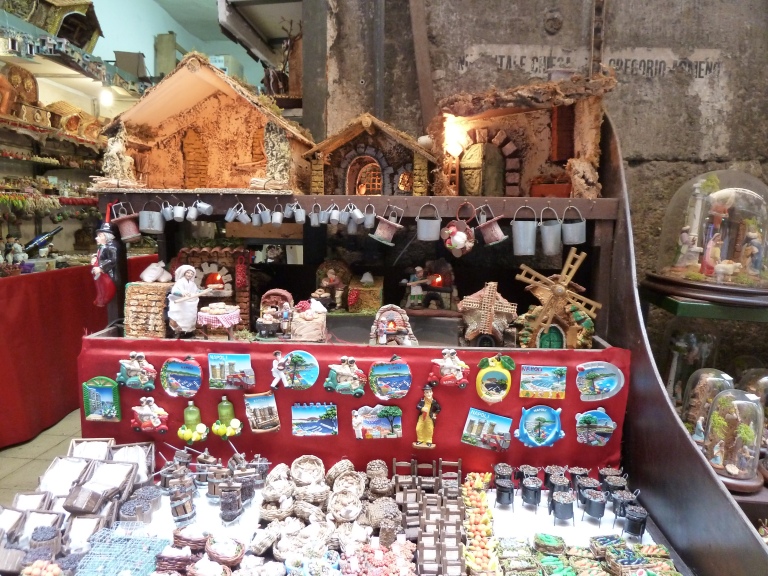 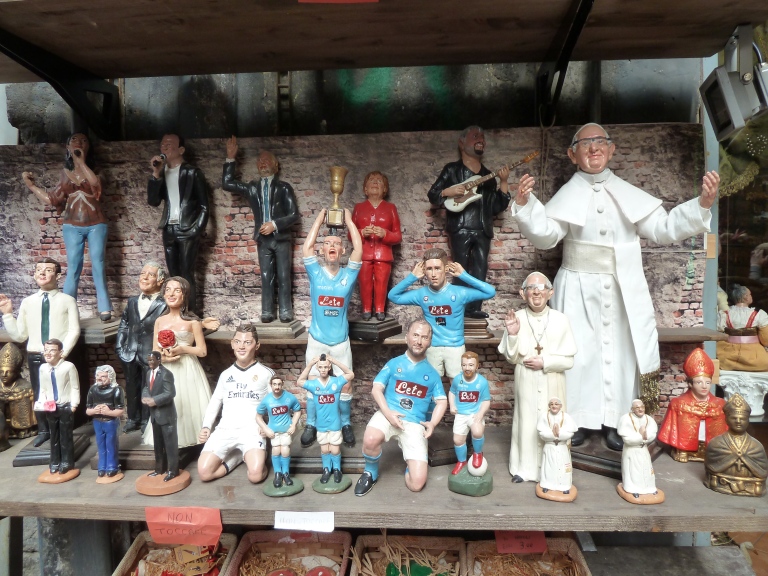 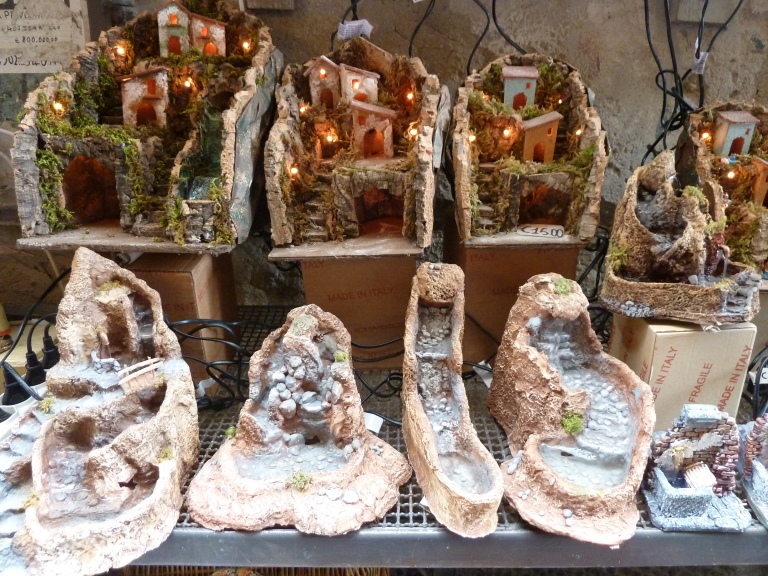 And local handicrafts for sale (made in China?):

A store specializing in umbrellas: umbrellas were introduced to England from Italy by Thomas Coryat, an Englishman who traveled often by foot through Europe and parts of Asia around 1600.

The subway in Naples is located at a great distance below the surface, since there are so many architectural and historical ruins in the stratum below it. Napoli Sotterrana provides a glimpse into that underground world. 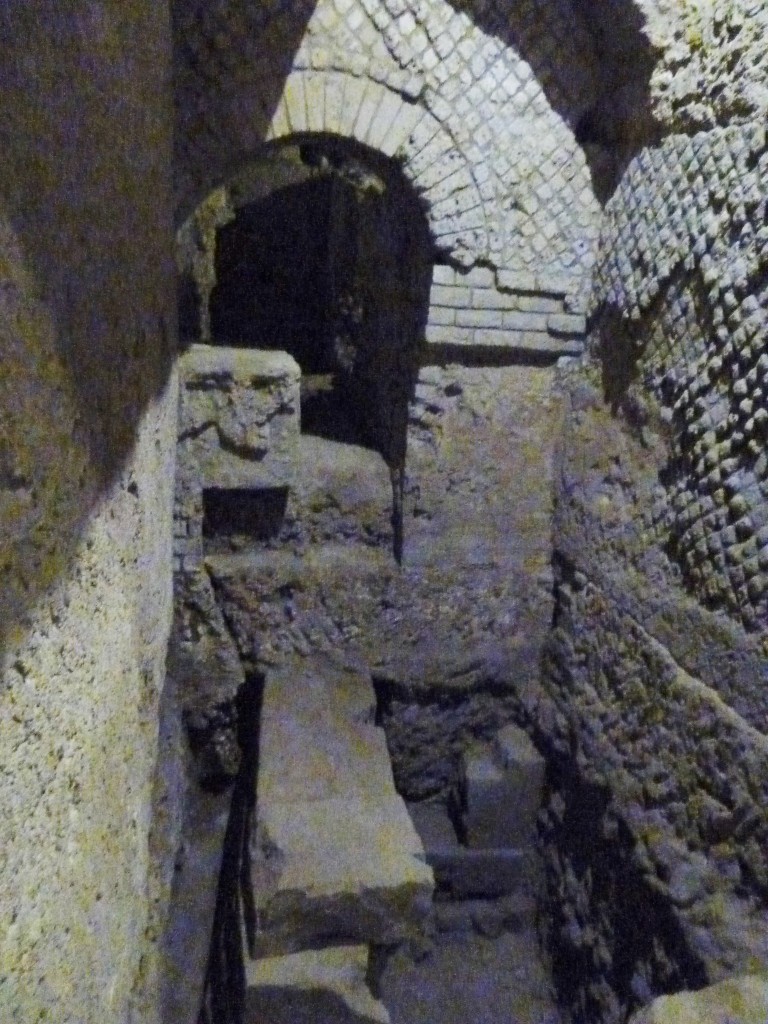 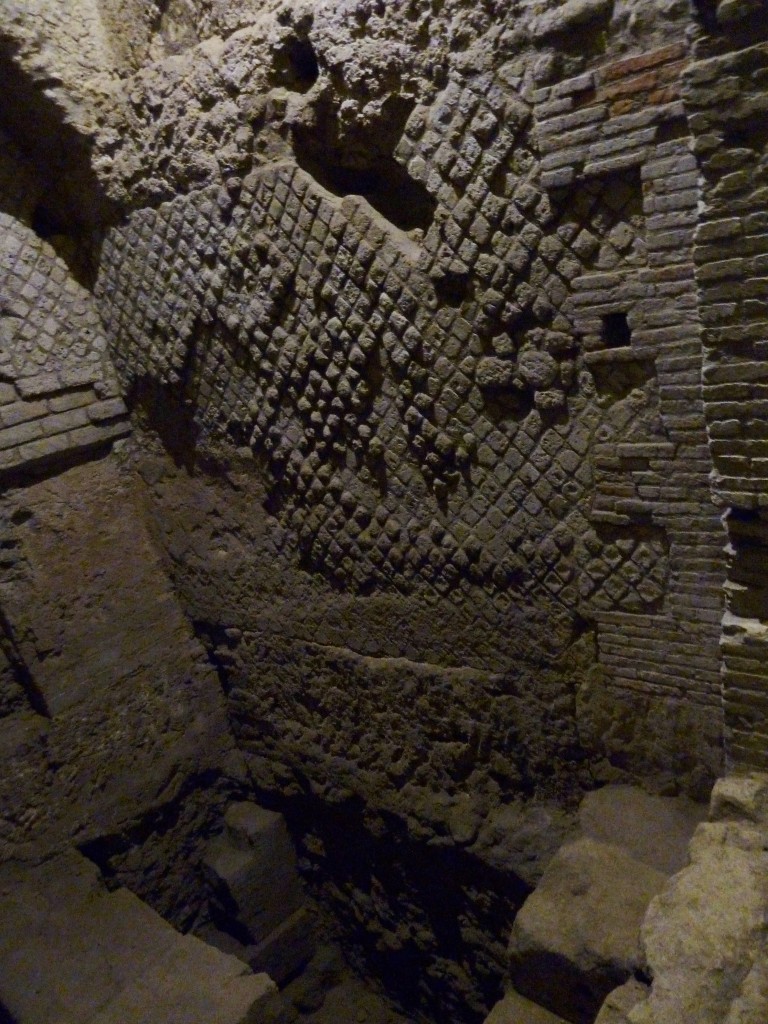 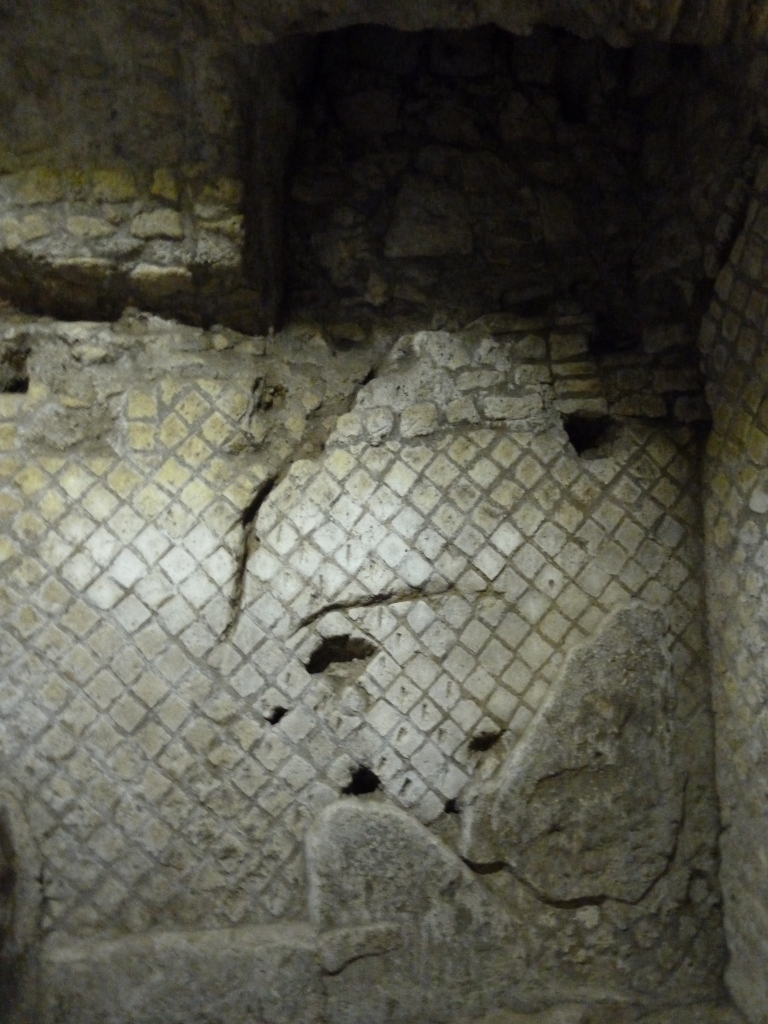 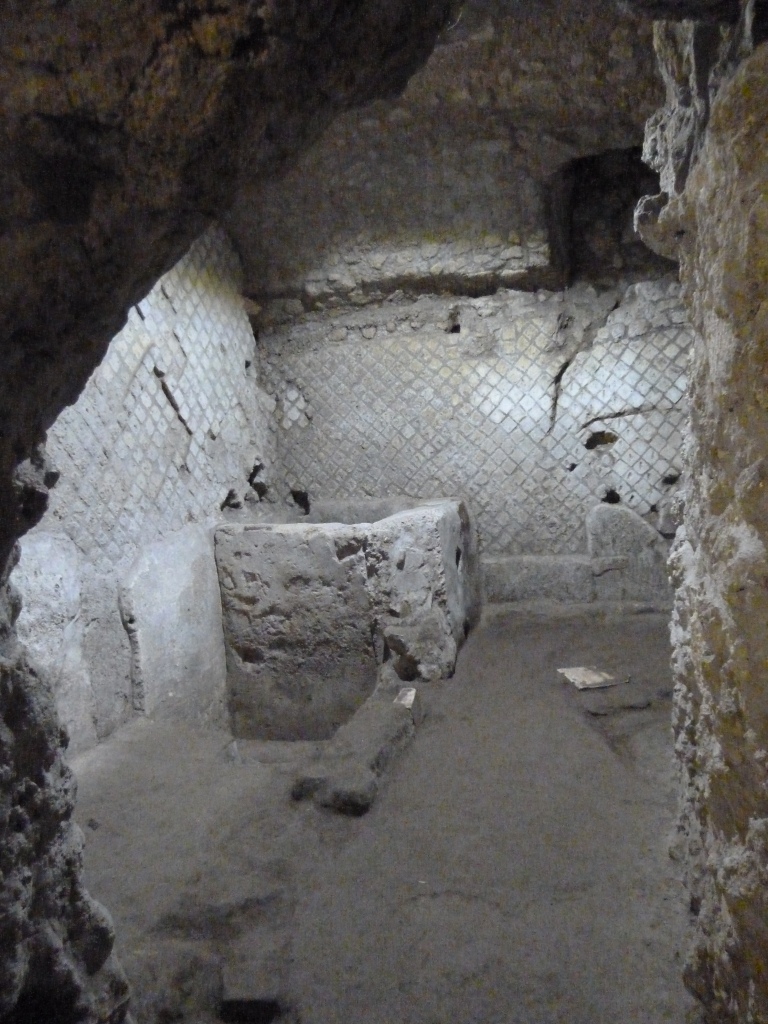 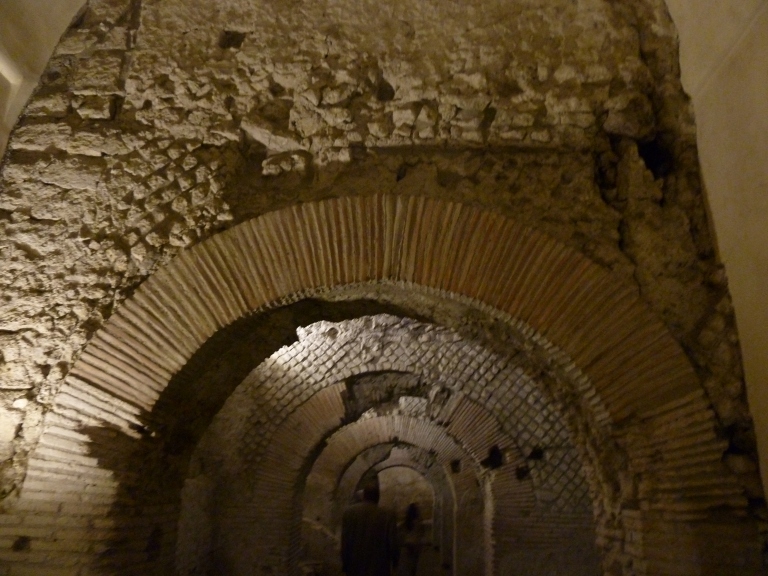 Coins were thrown down this one, I imagine because people thought it would bring them good luck. 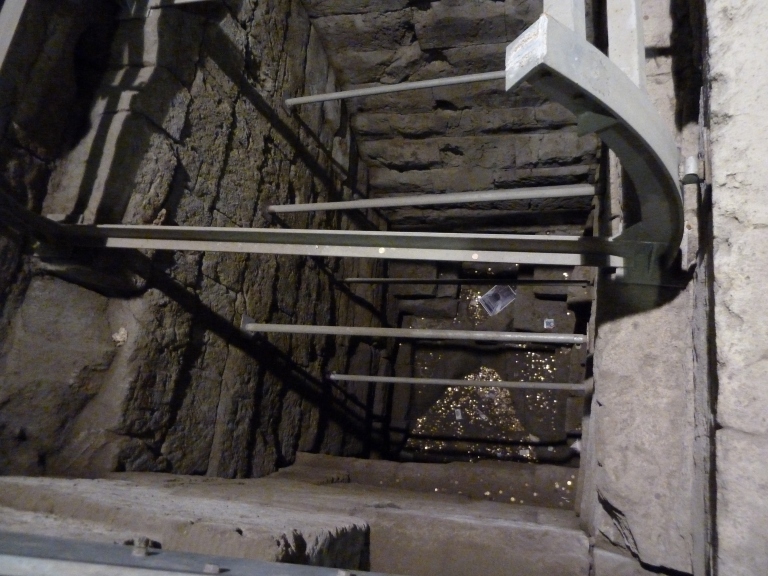 Piazza de San Dominico Maggiore with some nice outdoor cafes and the adjoining church of the same name. 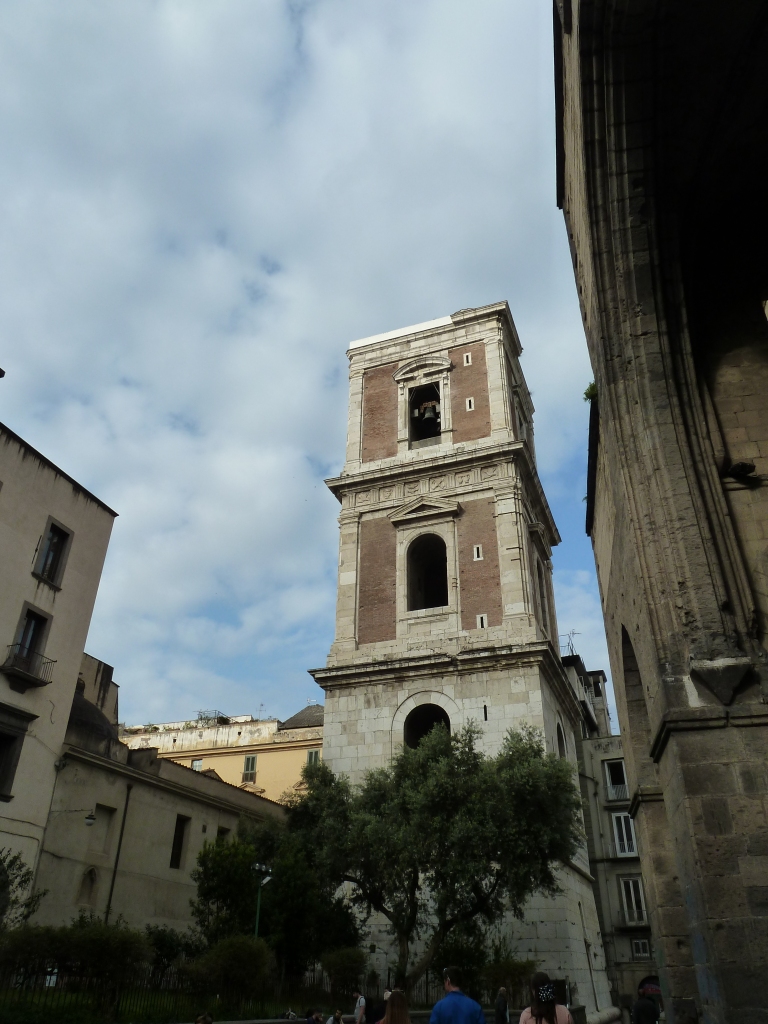 I suppose I could have researched when this and that was built, by whom and for what reason, but I forget such facts quickly since there is so much history in Naples. For me, it was a treat just ambling through the streets and taking in the sights. 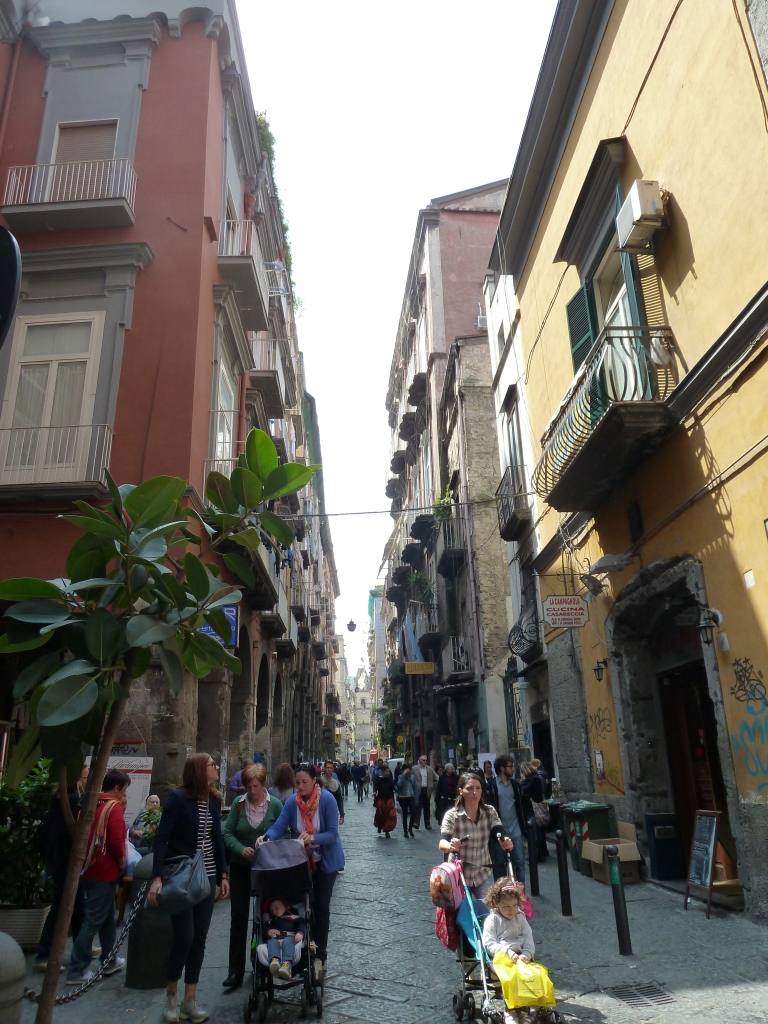 “Pulcinella is a classical character that originated in commedia dell’arte of the 17th century and became a stock character in Neapolitan puppetry. Engineered specifically to be the star of southern Italy, he is described as ‘the voice of the people, as the direct expression of a people as lively and spirited … Neapolitans …’.”

Pizza was invented in Naples, something not to be missed!

When I order pizza Napoli in other cities around the world, I get pizza with anchovies, capers and olives, but this is called pizza Roma in Naples for some strange reason.

Fountain of Giant was created in 1601. It was in different places, and was moved to its present site in 1905.

On Sunday, the road along the sea is closed to traffic and attracts lots of locals for walks: refreshing! 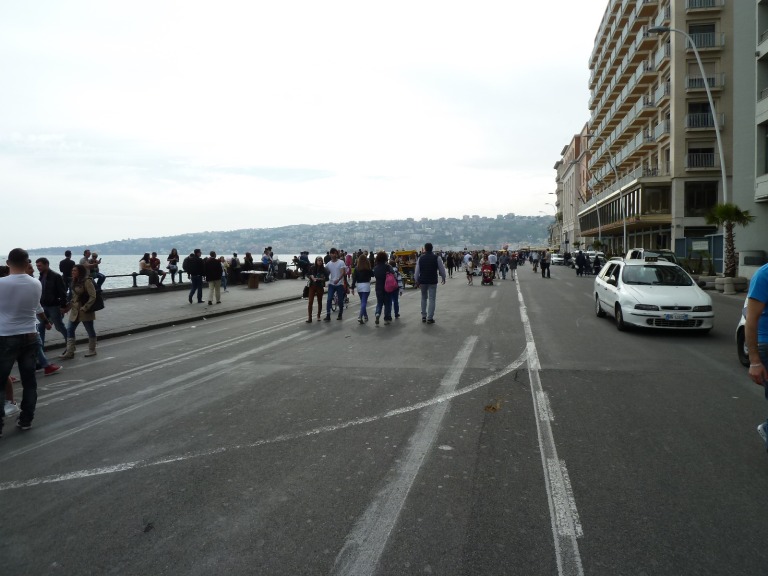 And the daring even for short dip:

A three-day weekend was certainly too short to see everything in Naples, but that was not our objective. However, it sufficed to savor the ambiance, and I found the city more exotic than many a city in Asia, a way of life so different from my everyday life. When the taxi driver, who took us from our local airport back to our city, heard that we had just come from Naples, he said he was originally from there and immediately started singing arias in a loud, beautiful voice. It really is a city of art and music!