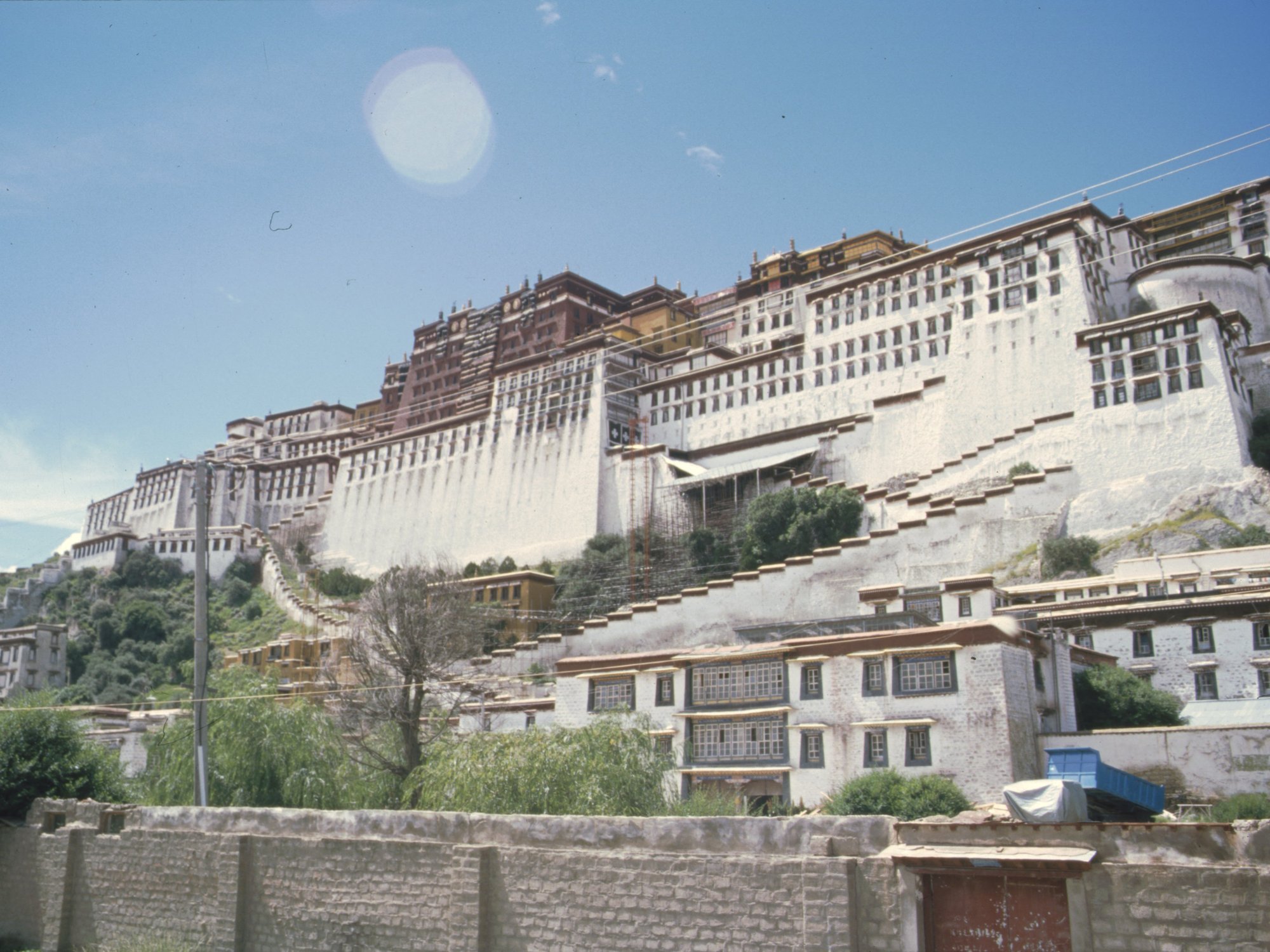 One of Mechtild’s childhood dreams was to visit Tibet, and we were lucky that individuals were able to travel there without joining a group at that time. Little did she suspect how closely her fate was tied to it.

Flight to Chengdu where we spent a couple of days hoping that our flight to Tibet would take place, because the weather was not always good and China had not yet developed its aviation systems as well as would happen a couple of years later (cf. the book China Airborne). Flights were canceled the day before we flew, but we were lucky and out plane took off as scheduled.

Going from near sea level to 3,656 m at Lhasa requires acclimation, and we spent the first week in Lhasa with slight headaches and walks around the city.

Good that we did not have toothaches

In front of Potala Palace

Tea time in the palace

Stop along the way where the ladies insisted that we drink some chang, similar to beer.

A hike up the valley to Samtenling Nunnery

Met this guy nearby, who had just climbed down from the adjacent mountain peak. He and his family lived there in the summer months.

With our driver: he spoke no English, but he knew Chinese in addition to the Tibetan language, so I was able to communicate with him to let him know our wishes.

By chance, we were able to witness this festival on our way to Nam-tso.

Nam-tso at 4,718 m. It is the largest lake in the Tibet Autonomous Region.

Pilgrimage, crawling completely on knees: Tibetans often do this for many kilometers circling around a sacred place, often a mountain or lake.

Tibetan teachers on an outing

The tents where we slept were quite comfortable, but the only problem was that there were no bathrooms.

Heading back to Lhasa, we were again lucky to come across a festival with horse racing.

Another highlight (seemed like everything was a highlight!) was a trek from Tsurphu to Yanpachen, 55 km taking 4 days and with its highest altitude at 5,300 m and never going below 4,400 m.

We set up our tent below the monastery where we spent the night and then went to explore it. There was a smaller temple higher up, and we made the mistake of taking a look into it. Monks were involved in some kind of ritual and were shocked when they saw us, immediately indicating that we should leave immediately

Nomads: they were as curious about us as we about them.

This lady wanted to try out our trekking poles

This girl ran up to us and then never left Mechtild’s side while we waited for the jeep to pick us up. When we left, she stood outside the car and seemed very sad as we drove away. Mechtild and she seemed to have an immediate, very close bond, and when Mechtild died the next year in Tibet, I was convinced that she would be reborn as this girl’s sister. I thought of going back there one day with some of Mechtild’s jewelry to see if any child would reach out to grab it in the Tibetan tradition of recognizing someone who has been reborn. Now, I doubt that I will ever do this, and I don’t think that I could bear to return.

Sometimes everybody has to lend a hand

Trip up north to another festival

And now my memory fails me: one last trip to another monastery. We traveled there on public transport, but when we wanted to leave on the one bus that left there each day, the driver was at first not willing to take us, since he did not know whether foreigners were allowed to be there. We fortunately convinced him to take us to the next town where we had to get off before reaching the bus station. Then we were able to get another bus back to Lhasa.

Last days and last look at the Potala: it was a fantastic trip, so fantastic that Mechtild resolved to return the next year. She wanted to see if she could travel alone, but asked me if I was not worried. I said no, she was a strong woman and could do it. Little did I suspect I wrong I was.