No, not Hermann Hesse and not Siddhartha, but instead a trip to the east of Germany: First time (not including East Berlin, where I crossed into a couple of times when I lived in West Berlin long ago) since early 1980s when I traveled with a delegation from the West German Communist Party. I was not a member and did not know them beforehand, but an American woman where I lived had contacts with them and recommended that I go and that they accept me. The journey was all-expenses paid except for the train ride to the East German border, and I was curious to visit the country.

A young Vietnamese student sat down next to us in the train after we had crossed the border. The communist party members did not show any interest in talking to anyone from the country, but I talked to the student and told him that I was from the USA. He did not believe me, so I took out my passport and showed it to him. He looked at it, then looked at me, looked at it again and then again looked at me. Suddenly he exclaimed: “I love America, communism is shit!” He went on to recount that he had an uncle in the US who was making a lot of money.

The West German communists feigned not to have heard him. Some young girls nearby started singing a satirical song about Ulrich Honecker, the East German leader, and again the West Germans acted as if they heard nothing, and again when some young East Germans shouted “Communism shit!” at another train station.

We were put up in a half-finished youth hostel (showers not functional) somewhere in the countryside, far from anywhere. Some workers showed up once in a while, but did not do much and only looked strangely at us. We had dinner at a local bar the first evening where some East German communists talked to us. One older man explained how they had welcomed the communists at the end of WWII, because they just wanted to prevent something like Nazi Germany from ever happening again. At the end, he asked the local communist bureaucrat if it was okay that he said that.

We visited a plastic flower factory, which seemed like something out of the 19th century, but it was impressive that they had their own doctor, and she explained all the medical care that they received for free. There was a visit to Dresden and the military museum, and our guide looked exactly like Sergeant Bilko from the silly TV comedy series in the 1950s, which made it difficult for me not to break out laughing every time he spoke. Lunch at a “good” restaurant in Dresden, but the food was not of very good quality.

My only other “contact” with East Germany was a friend whom I met in a hostel in Amsterdam. We immediately hit it off, and I then traveled with him to Germany and stayed in his apartment for a few days. He had escaped from East Germany only a few months previously. Turkish guest workers traveling home helped him to hid in the baggage rack behind lots of luggage from Bulgaria to Turkey. In Istanbul, officials wanted to see his ticket, learned he was from East Germany and put him back on a train to Bulgaria. Crossing the border, he tore up his passport and threw it out the window. At the Bulgarian border, he told them he was a West German with no money and no passport. They put him back on a train going the other direction. The Turkish officials became furious when they say him and put him in jail for 12 days of solitary confinement with some very unpleasant interrogation sessions in between. Then they finally released him the West German consular officials, who issued a travel document and gave him a plane ticket for West Germany. He stated that he had fled East Germany because he did not want to join the army, but the West Germans soon informed him that he had to serve in their army. He fled to France, first working selling cold drinks at a beach in the south and then as a tour guide for Germans. He had studied art history, so he drew up special tours for a German travel agency and was able to take groups to historical sites that were not in most guide books and provide expert stories about them. He later joined the communist party in France and sometimes worked as an interpreter for visiting East German delegations. When I asked him what they thought, because they could tell where he was from due to his accent, he said that they know what is rotten in their system and didn’t ask him about how he got there. The grandmother of his girlfriend at that time had been shot to death in Los Angeles by a deranged person shooting people at random. It was not until more than 30 years later that I finally found him again via the Internet.

When I have vacation, I prefer going to other countries, since it is also refreshing for the mind. However, my girlfriend’s cousin invited us to his 40th birthday party in Arnstadt near Erfurt in the former East Germany, so off we went. I had expected only to see dilapidated buildings, but most had been renovated nicely and everything looked a lot nicer than most areas in West Germany. Perhaps it was the gray skies and the somber clothing of most people in Erfurt that created such a gloomy atmosphere for me there or maybe just my prejudices and expectations. There were few foreigners, not even foreign tourists, but then Erfurt is not a prime tourist destination although it is quite a pretty city. Arnstadt nearby, where our birthday host lives, was also quite nicely renovated, but he told us that he had to work in Berlin, three hours away, because salaries and wages were so low there. East Germans, who now make up the highest ratio of supporters of the right-wing, xenophobic nationalist political party in Germany, can now see lots of beautiful buildings and modern transportation links, but have little chance for achieving a higher standard of living unless they are of an entrepreneurial spirit, something they apparently lost during 40 years of communist rule.

Spruced up old town of Erfurt. 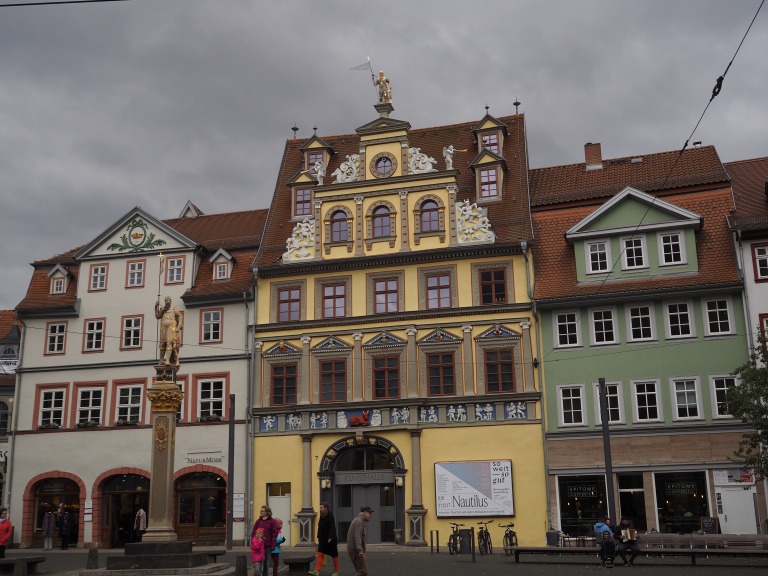 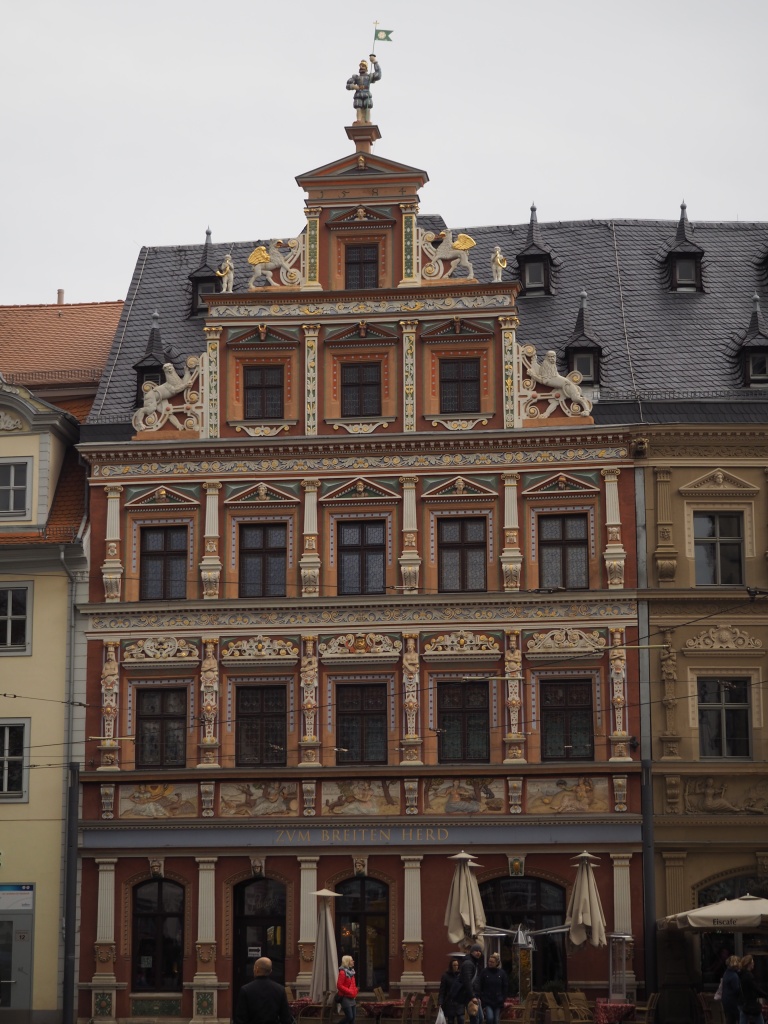 The Petersberg Citadel with Erfurt Cathedral and St. Severus’s Church), a large and well-preserved town fortresses. 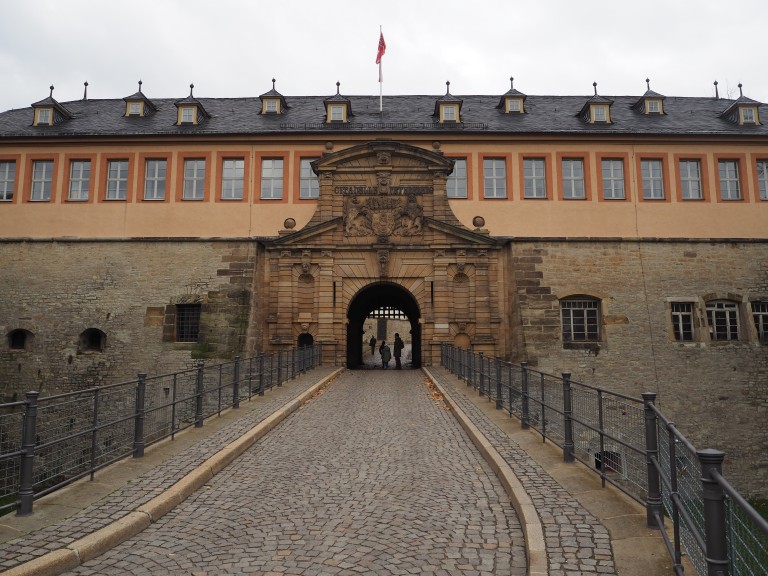 The Bach Church in Arnstadt. 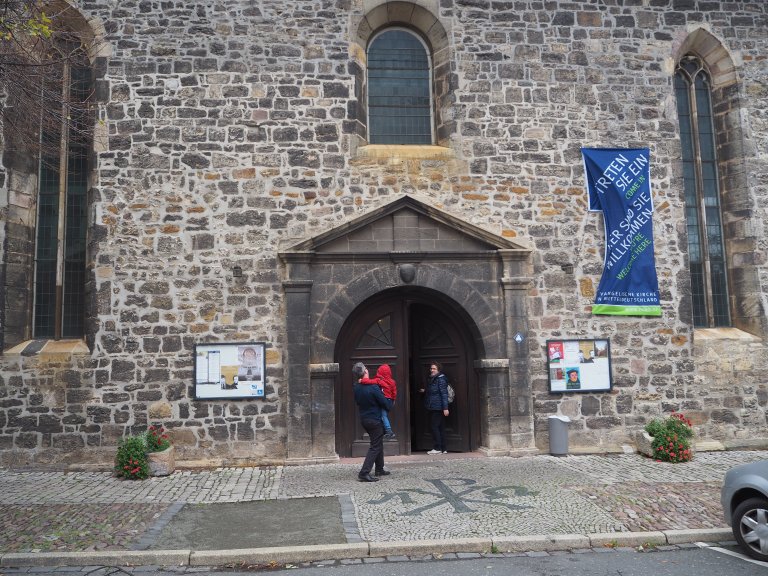 One thought on “Journey to the East”